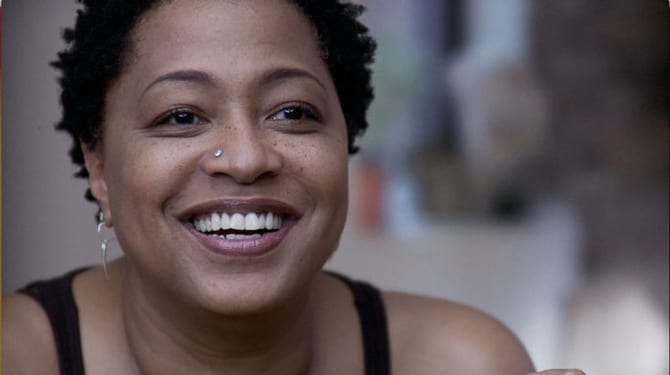 Supersonic soul singer Lisa Fischer is a legend in the music industry. She has worked with everybody from her beloved mentor Luther Vandross to The Rolling Stones. But it was the Oscar-winning 2013 documentary 20 Feet from Stardom that finally – and truly – launched Fischer’s career into the stratosphere, alongside the many great divas she has worked with for many decades.

Fischer’s electrifying vocals also lead to her collaboration with visionary choreographer Alonzo King who invited Lisa to create the soundtrack for a dance piece called The Propelled Heart performed by his famed Alonzo King LINES Ballet company. When The Propelled Heart makes its Canadian debut with a five-night run at Montreal’s Theatre Maisonneuve beginning on April 30, the audience will experience the power of song through movement when Fischer performs live onstage with 12 dancers.

I recently caught up with Fischer for a candid look back at her fabled career, The Propelled Heart, and her diva-adoring gay fans.

Fugues Magazine: How did you become involved with the Alonzo King LINES Ballet and their critically-acclaimed show The Propelled Heart?

Lisa Fischer: They were doing a show at the Joyce Theatre in New York City a few years back. I got an inquiry from my manager, so we went to see the show and they were simply amazing. After the show we went backstage to meet (choreographer) Alonzo (King) and I was so taken by his calm, warm spirit.

The soundtrack was composed by you and your Grand Baton bandmate JC Maillard. How did this collaboration with Alonzo King work?

He was so helpful guiding me through the whole process and allowed me a lot of creative freedom, along with JC. We flew out to San Francisco to watch the dancers move and work. Alonzo had already named the piece, and it took us about three weeks to a month to pull it together.

You perform onstage with the dancers.

JC and I perform live. There is a moment when I am sort of alone, but I am mostly weaved into the ballet.

I must ask about Luther Vandross: I saw you both live for the first time at the Montreal Forum on Luther’s ‘Never Let Me Go‘ tour in 1993. Over the years, what was your favourite moment with him?

Honestly, anytime I was onstage with him was pure joy. He would be so focused on the audience and their joy, but there would be moments when we gave the other a look or a smile, if we sang something beautifully.

Luther encouraged you to make your debut solo album in 1991, and your breakout ballad, How Can I Ease The Pain, tied with Patti LaBelle’s Burnin’ for Best Female R&B Vocal Performance at the 1992 Grammy Awards. Ironically, you sang backup on Burnin’, and you beat Aretha Franklin to win that Grammy! What was that Grammy ceremony like for you?

Insane! First of all, I didn’t expect to be nominated. In my mind, in my heart, I had a personal win. Just to be nominated alongside these singers – Gladys Knight and Vanessa Williams were also in the category! That caliber, those women whom I listened to and grew up with. It was surreal. I thought there was no way I was going to win, I was just grateful to be in the audience. When Kenny Loggins said “Tie, Burnin’,” I started clapping. I thought he meant Patti won. I was sitting with Chris Walker, who was an artist for Elektra Records as well, and he said, “You know they called your name?” I was like, “Stop playing! I’m going to kill you if you’re teasing me!” I didn’t want to get up and then be embarrassed. I walked to the stage and realized none of the security guards were stopping me. And it was true – I didn’t even hear them call my name! To share that with Patti was just awesome.

You have sung with The Rolling Stones since 1989. What does it feel like when Keith Richards says, “Lisa’s as powerful as the rest of the guys put together.”

All the Stones are special in my heart and they are all so different. But their differences gel well together. Keith is my heartbeat. He expresses so much without saying a lot. It’s in his eyes, it’s in his walk, in the way that he moves his hands. So a quote like that coming from him really means a lot. He is so humble and so kind. I adore him.

It was for a morning TV show. What sticks out in my mind is the contrast of how petite she is, and how bigger than life she is. It’s her laugh, her smile, her giggle, her comfort with herself. When you’re around her, you felt like she was your girlfriend. It’s the way she invited people to be themselves, and I love that about her. And I love her song that Whitney sang, I Will Always Love You. When it’s a beautiful song, it translates well into every genre. To have that kind of gift come from this petite woman, it was just such a lesson for me, that we all can do anything.

Rehearsing with her was always interesting because I come from a more, uh – I went to Queens College where I studied a bit of classical music and the way I put harmonies together is more mathematical. Sitting and rehearsing with her is all about the feel. I would sing something, then she would sing it for me, and the energy that she wanted it to be in. That for me was a huge lesson. It’s not just about the notes. It’s about what you bring to it.

What is like to witness firsthand incredible women like Dolly Parton and Tina Turner take control of their careers?

That’s interesting. You can still be FEMALE and deal with THE world in a strong way, because a lot of times – at least for me, the way I was brought up – there was a protocol. When you speak to adults, it is mister or miss or missus. There was a certain kind of culture of respect and not being too over-familiar. So when you’re a woman trying to own your own universe, you sort of make the rules. With those things in mind is a way to approach people and be respectful, and still be powerful and be heard.

Chaka Khan and her vocalists singing Ain’t Nobody in concert is a major vocal workout! What is it like to perform with Chaka?

To me she is like the trumpet of all singers! There will never be another like her, as far as the timbre of the voice. And her expression. It is a vocal workout, as you say. Many times before meeting her, I listened to her records and sang along with all the parts because it was fun. Then to actually get the opportunity to share space with her and feel the actual vibration of her voice was a dream come true.

I interviewed Chaka once, in 2007 when she headlined at the Montreal International Jazz Festival. I asked Chaka this question – which over the years I have also asked Patti LaBelle, Donna Summer and Cher, which I would also like to ask you:  Why do gay boys love their divas? What is it about you that we love? Is it the big voice? The big heart?

I think it’s about finding balance and comfort in (the) imperfection (of their cherished divas). The things that make us unique sometimes come from a place of trying to maneuver what you might consider to be a weakness, which when you work on it, becomes your strength. And I think that translates with many people. We all have our insecurities, but whatever that thing is that haunts you sometimes is the thing that saves you.

How did the Oscar-winning 2013 documentary 20 Feet from Stardom change your life?

Prior to the film I was working with the Stones, with Luther, and it was an amazing opportunity to tour with all these artists. But the flip side of that was not being in control of when you worked. You work when they work. When the tour is over, you go home trying to figure out the next job which financially can be very unsettling.  When the opportunity for the documentary came, I just followed the path, did the interviews, had a good time, but didn’t expect anything. I did the work because I love doing it. When the documentary won the Grammy and an Oscar, people began to ask me if I had a band, and I didn’t at the time. I thought the solo part of my life was a photograph in time and that time had passed. But the documentary gave me a second life. It gave me the chance to revisit the music of my life from the place I stand now, as a woman of 60. It’s been a real gift for me, to come full circle.

How cool is it to now lead your own band, Grand Baton?

I don’t really feel like a leader. It’s more co-operation. It feels more like we get to share our musical history and birth it into something new. It gives me comfort to think of it that way, but I realize I need to start to own more of the leadership role. That’s part of the journey as well.

Lisa Fischer performs live with the Alonzo King LINES Ballet company in The Propelled Heart at Theatre Maisonneuve at Place des Arts, from April 30 to May 4.