Marching to their own beat: Crown Lands drummer Cody Bowles 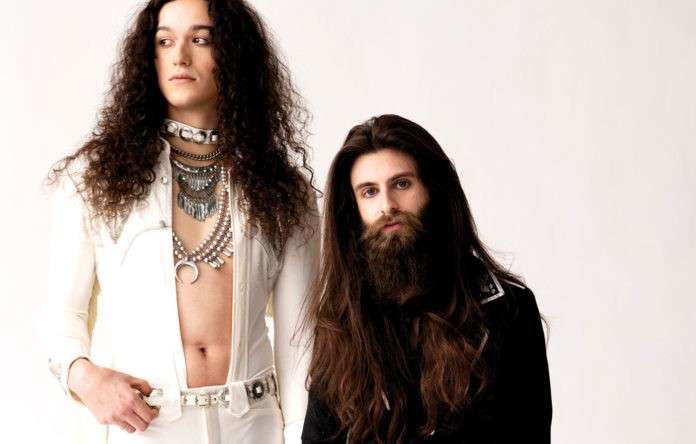 The future looks bright and loud for powerhouse rock duo Crown Lands. Praised by the BBC and Rolling Stone, they are the next great rock band to come out of Canada. Crown Lands’ self-titled debut album won band members Cody Bowles (vocals and drums) and Kevin Comeau (guitar, bass and keys) the 2021 Juno Award for Breakthrough Group of the Year.

Their band name also reflects their musical ambitions: «Crown Land» is territorial area belonging to the monarch—or, as Bowles (whose own heritage is half Mi’kmaq, an Indigenous tribe from Nova Scotia) puts it: «Crown Land is stolen land and we are reclaiming it.»

About Residential Schools in Canada, the band issued this statement: «This is an extraordinary moment for us. Still, we want to take this moment to talk about how every Canadian residential school should be thoroughly investigated. The families of those departed all deserve closure. People are living in abhorrent conditions in this nation; there’s a lot more to talk about here. We’re going to keep fighting to start these conversations and hopefully spark some real change.»

Says Bowles, «The white buffalo is a symbol of prosperity and strength in Indigenous cultures, so the song is about reclamation and overcoming oppression. We wanted to make something that was our projection of the future we hope will manifest.»

I recently sat down for a candid Q&A with the fresh and inspiring Bowles, the Mi’kmaq Two-Spirit lead singer of Crown Lands who uses «they/them» pronouns.

You met Kevin at an audition for a band you played drums in?
That was about 7 ½ years ago. I wasn’t singing at the time, I was just playing drums. And we were looking for a guitarist. Kevin crashed the audition, picked up a guitar – he was a bassist at the time – and blew us away. Instantly Kevin and I connected over our love of Rush, he mooned me and he has a starman tattoo on his butt! We became instant best friends. It’s kind of like being married, man. I have one person to always rely on every day, we always got each other’s backs. Even if we’re going through personal things, we’re always there for each other. It’s really special and I’m so grateful to have him in my life.

Your dad was a drummer too. How did he influence and inspire you?
I started drumming at the age of one, believe it or not. My dad was a drummer his whole life. He used to play 2112 by Rush on this drum kit we had in our basement, and I would watch him play. I would sit there and my jaw was dropping. I didn’t even understand what was going on necessarily but it blew my mind.

He was the best drummer I’ve ever seen and ever known. He and Neil (Peart of Rush) have influenced me greatly. My dad actually taught me only the basic beat of drumming. He was like, «Okay, I’m going to teach you this. Then you have to find out what your sound is for yourself.» I think that was the greatest thing that he could have done to me.

How important has the music of Rush been to your own musical development?
When I was young, Rush, Neil Young, and Buffy Sainte-Marie were household names.
I listened to Rush exclusively pretty much up until high school. All the cool kids would get invited to parties but I would just go back home and make music and practice drumming and get my chops up, because I started singing way later. Rush has absolutely influenced me my whole life.

There is a clip on your Instagram of you drumming on the same kit Neil Peart used to record Snakes & Arrows in Nashville. You were in Nashville to collaborate on your song «Context» with Nick Raskulinecz, Rush’s producer in their later years. What was that experience like?
Surreal! It moved me to tears. We were all having a really emotional time at the time because the day before (on January 7, 2020), Neil had passed away. We didn’t know if our session was going on still or not. Then we got a text from Nick saying, «You guys got to carry the torch.» So we knew what we had to do. Then Nick asked me if I wanted to use the drum kit Neil had given Nick after Rush had recorded Snakes & Arrows. It blew my mind, man.

You’ve worked with producers Nick Raskulinecz, Terry Brown and David Bottrill, who all worked with Rush. Was this intimidating?
It was a dream come true. Nobody gets to work with that trifecta!

Your new song «White Buffalo» echoes Led Zeppelin.
Led Zeppelin was a massive influence on me. I started my early singing influenced by Led Zeppelin, Rush and Queen. I looked up to that triumvirate of singing gods. I never had any formal vocal training until a couple of months ago. I’ve been really trying hard to improve every day. Everything we’ve recorded up till now I didn’t really have any vocal training on, so I’m excited to see where this goes next.

You have a flair for fashion. How important is fashion to you?
Freddie Mercury is kind of like the epitome of fashion to me. Growing up I liked spending days in thrift stores, finding out what works for you and what doesn’t. I shop exclusively from the women’s section because that’s where all the good clothes are. I don’t really have any specific things I go for. I just find a piece, really like it and rock it. Stage clothes are also clothes I wear every day. Everyone looks at me really strange when I go out, but I like it. It’s great to express yourself.

How do you balance the masculine and feminine aspects of your identity?
Being Two-Spirit, you kind of have both. You just kind of are. When I started telling people I’m Two-Spirit, everybody said, «I already knew. You just have that energy.» It was beautiful to have that overwhelming acceptance.

But I don’t really think about it. Sometimes I’m more masculine, sometimes I’m more feminine. It’s like you’re a beautiful star with a bunch of beautiful planets surrounding you, and you’re pulling more towards one, you’re favouring another, but you’re never in one place.

You were teased and bullied in high school. I think you are an inspiration and a role model. What words of encouragement do you have for other youths being bullied at school?
That it will get better. And no matter what you’re being teased about. Bullying comes from other people’s insecurity. You just got to be you. Because you can’t afford to not be yourself. There’s not enough time in your life to not be yourself. So just be yourself. And you will find people that love you for who you are.

How does it feel to be one of the best new rock bands to come out of Canada?
It’s strange. You get imposter syndrome. You’re like, wait, why? Then you just keep on going. But without our team we would just be where we were before, jamming in a garden somewhere, right? You’re really only as good as the people who support you and lift you up. Kevin and I both really truly believe that. We’re just so grateful to be where we are with the people that we have supporting us.

INFOS | Crown Lands headline live concerts at the Axis Club in Toronto on Dec. 1, the Bronson Centre in Ottawa on Dec. 3, and Petit Campus in Montreal on Dec. 4. Visit crownlandsmusic.com.