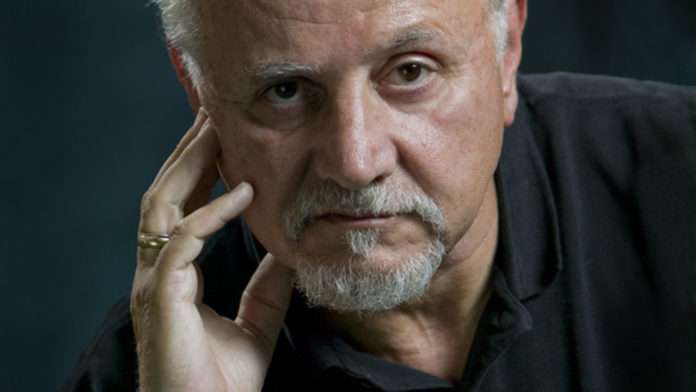 The Godfather of Gay Lit Felice Picano is the author of more than 30 books of poetry, fiction, memoirs, nonfiction and plays, including the best-selling novels The Lure, The Book of Lies, and Like People in History, as well as the literary memoirs Men Who Loved Me and A House on the Ocean, A House on the Bay.

Along with Andrew Holleran, Robert Ferro, Edmund White, and George Whitmore, he famously founded the Violet Quill to promote and increase the visibility of gay authors and their works. Picano also began and operated the SeaHorse Press and Gay Presses of New York for 15 years. In 2009, the Lambda Literary Foundation awarded Picano its Lifetime Achievement / Pioneer Award.

Originally from New York, Picano now lives in Los Angeles, but returns to Montreal for a special literary event at Saga Bookstore on June 11. We recently sat down for a candid Q&A.

Dr. Anthony Fauci has been fighting AIDS from the beginning and will attend the 24thInternational AIDS Conference being held in Montreal from July 29 to August 2. What do you think of Dr. Fauci’s AIDS legacy?
I met him when I was at Gay Men’s Health Crisis (GMHC). I met him with the rest of the board – there were five or six of us. It was pretty early on and, like most doctors at the beginning of the crisis, he was not very knowledgeable about AIDS, but he learned pretty quickly. Doctors didn’t know what it was, their ignorance was widespread and caused them to under report it, and fail to understand it. But Fauci learned pretty quickly and eventually became completely knowledgeable about it. When it comes to COVID, I think he was very brave. I think the lessons he learned from AIDS were very clearly in his mind when he fought COVID. He saw what happened with AIDS when there was no government backing at all, and he didn’t want to see that happen again.

How did you not get AIDS, Felice?
Because I have the CCR5-delta 32 genetic mutation and I cannot get AIDS. In New York, about a year and a half into the discovery of HIV, Dr. Luc Montagnier (the French virologist who won a Nobel prize for co-discovering HIV, and who died on February 8, 2022, at age 89) was at GMHC and got a whole bunch of students from Columbia University and other New York schools to come and do complete genetic backgrounds. It was a 15-page thing. People would come to the centre and fill these things out. I did the same thing. And in 1996, when everybody had died, and I moved out to Los Angeles, I got a forwarded telephone call from Montagnier saying, “Did you hear about CCR5-delta 32 genetic mutation?” I said yeah and he said, “Well, you’re one of the people who has it.” It means that my T-cells do not have the hooking mechanism, so an AIDS virus can’t come along and hook onto it.

You wrote the foreword to the 1997 book Gay Widowers: Life After the Death of a Partner.
Yes. When a woman loses her husband, when a man loses his wife, there’s a whole societal set of behaviors that we engage in that were missing for gay widowers. Totally missing. People I knew for years, who had to know that my husband had died, ignored it. There were no social conventions in place for it and as a result, it was totally ignored.

Did this make you angry?
At the time I got angry. I don’t think I ever really grew out of it. I just learned to ignore it. And to expect less of people.

Did you experience survivor’s guilt?
They were not earned deaths, they were wrongful deaths, so I never felt that. There was a point when, a year or two after my partner died – my soulmate Paul Popham who had been the president of GMHC for years and has been seriously maligned by Larry Kramer in that stupid play (The Normal Heart) – when he died, I went to his memorial service. As I was walking out, I said to somebody I said, “This is the last memorial service I’m ever going to” and I got home and took off my black Armani suit, and I put it on a hanger and hung it outside on the fence outside my apartment, and never wore it again.

What was Larry Kramer like?
Larry, as we know, had internal homophobia. He was one of the angriest and bitterest and most resentful persons I ever met in my life. I had just come back from L.A. where a movie project that I was doing with Cary Grant’s company fell through after six months or so. I came back and met Larry who had heard about it. He said, “Aren’t you horribly angry about all that?” And I said, “I made a ton of money. I did very little work. And I didn’t think it would be a movie anyway.” And he said, “Well, I was very angry that I couldn’t get so-and-so done and it was all because I was gay.” I said, “Look, Larry, I was openly gay the whole time I was there.” When I left L.A. people offered to find me more work.

Did you and Kramer ever talk about Paul Popham?
No.

Today Kramer is hailed as a gay hero.
I call it Saint Larry. A good writer is writing a biography of Larry Kramer. I was interviewed and we had a long conversation. And I said, “I will leave you with these two things. I never saw him dancing. Never once. And I never heard him laugh out of happiness.” That’s the type of person he was.

You have said that the great success of Torch Song Trilogy by Harvey Feirstein allowed Gay Presses of New York to flourish.
I haven’t spoken with him in a long, long time. At the time I actually went and met with him in his place in Brooklyn and we talked about doing the book. That’s when I found out that was still working on the last play (in the Torch Song Trilogy collection of three plays). At times he’d come to me early on and say, “We need to cut the play. Would you help me?” And I would do that. It was always a professional relationship.

What do you think of Harvey’s new memoir I Was Better Last Night?
The book is very entertaining. It’s very long and very factual. There’s a lot of good stuff in it if you’re interested in musical theatre because he did so much of it. From my point of view as a publisher, he didn’t develop as a publishable author. But he was wonderful and generous and nice to people.

Everybody wants to be famous today, but few think of the ramifications. For instance, do you miss anonymous ex? Has it even been possible for you to have anonymous sex in the last 40 years?
Only 30 years too late on that question! It is possible, I can tell you that. I lost my anonymity in 1980 or 81 and I withdrew. At one point, I was the most famous gay writer in the world. And I didn’t like the fame at all. I didn’t like what came with it. People would push my friends and my lover away to get to me.

Talk to me about Rudolph Nureyev. Did he not grab your ass one day?
He grabbed my ass when I was standing on a street corner in Chelsea, trying to get me into his Jaguar convertible. I was talking to some people when he drove up, leaned over and grabbed at me. He wasn’t the only one who’s ever done that!

On your current book tour you are travelling with Jeffrey Round, the award-winning out Canadian author of the popular gay Dan Sharp mystery series.
Jeff has written a wonderful mystery series and he’s going to be reading from that, while I will probably read from my new duology, Pursuit: A Victorian Entertainment and Pursued: Lillian’s Story.

The banning of LGBTQ books in America these days is scary.
I’m not surprised this happening because the United States is a puritan country. People keep forgetting that. And Canada is a little bit better but not overly so. It’s important we all remain vigilant.

Meet Felice Picano and Jeffrey Round at their book reading and book signing event at the Saga Bookstore (5574 Upper Lachine Road / Chemin Upper-Lachine) on June 11 at 6 pm. Visit librairiesaga.ca and www.felicepicano.net.