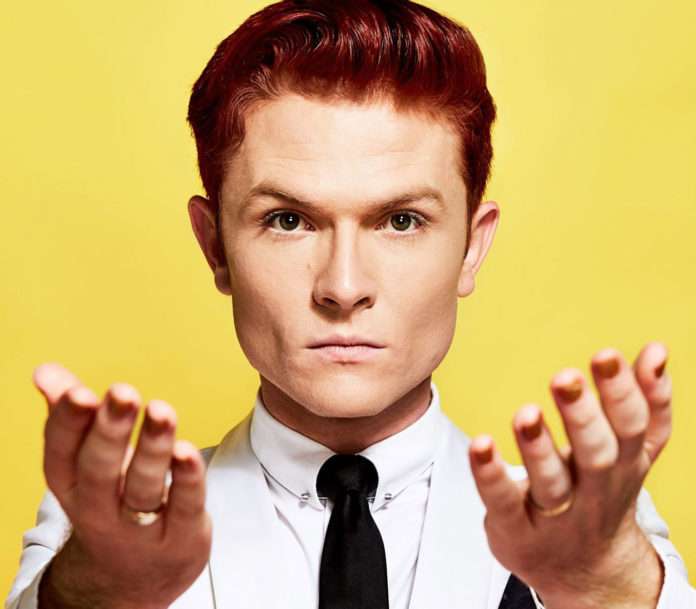 The last time award-winning Australian stand-up comic Rhys Nicholson was in Montreal to perform at the Just For Laughs Festival, in 2019, he, comedian Erin Gibson and Queer Eye TV personality Jonathan Van Ness decided to visit a strip joint.

“We thought we were going to a gay strip club,” Nicholson recalls, “but when we walked in we realized we were walking into a room of middle-aged white women. As Jonathan walked in, a roomful of fag hags lost their mind!”

That same year during Just For Laughs, Nicholson also went to one of Montreal’s famed gay strip joints with out comic Matteo Lane and drag superstar Trixie Mattel.

“To be honest, I’m a little bit prudish about things like that,” Nicholson confesses. “I’ve always found men slightly clothed to be much more attractive!”

Nicholson returns to Montreal and Just For Laughs to headline his award-winning Rhys! Rhys! Rhys!comedy show at the intimate Théatre Sainte-Catherine from July 21 to 29.

Co-owner of Melbourne’s newest live comedy venue, The Comedy Republic, the 32-year-old comic has toured the world, co-stars in the new Netflix Sci-Fi comedy The Imperfects which was filmed in British Columbia, and won over the world with his star turn as a judge on seasons 1 and 2 of RuPaul’s Drag Race Down Under.

Nicholson and I recently sat down for a candid Q&A.

How did you get cast in RuPaul’s Drag Race Down Under?
I think RuPaul might have seen my Netflix special and he’s pretty specific about what he wants and the type of dynamic he wants. He seems to like comedians. I call myself the Paul Abdul because I’m funny and talk about whether something is genuine, as someone with a deep love of drag.

What is it like to work alongside RuPaul and Michelle Visage?
I wish I had a juicy story but they’re really great and professional. The first season Michelle definitely took me under her wing. I think she knew the fans can be particular and got me prepared for that. And the best way to describe Ru is “interested.” I mean there are stories about Ru being kind of aloof and I’m like, “No, I think he’s just professional.” When you get to that level of fame, it’s a particular type of fame where people want something from you. People demand “I need you to give me a moment in my life that I’m going to remember forever.” And if a star doesn’t provide that in spades, well then you’re an awful person.

I met and interviewed queer Aussie comic sensation Joel Creasey at Just For Laughs in 2015. I was delighted to learn that you co-starred in his ABC documentary GayCrashers.
We’re best buddies. We came up together. We do live shows together quite often and definitely want to make a TV show together. We can just talk to each other for a long time and make each other laugh. He’s a funny one, Joel, he’s genuinely one of the funniest people in the world. He’s just one of those people that can be in any room and he’ll just have them in a second.

Joel came out to his parents at age 16. What was your experience like?
I’m really lucky I have very artsy parents. I never really had to come out. I’m truly deeply privileged in that way. I grew up in a small town but my home itself was very supportive and lovely.

I’m old enough to remember trailblazing queer comics like the late great Bob Smith who was billed as “the first openly gay comic to appear on the Tonight Show.” The showbiz landscape has changed so much in the past 25 years, but I was wondering what it’s like as a queer comic to navigate the terrain today?
Even in the 12 years that I’ve been a comedian I feel like it’s changed. When I first started we still had to make a little joke when we came out on stage. We kind of still had to be crass versions – or at least I was – of a gay person. We’re performing to a predominantly straight audience, so you kind of had to be a bit of a zoo animal.

Now I feel like it’s different. I co-own a comedy club in Melbourne. And the younger generation of comedians who started 10 years after me, so many queer performers won’t even bring it up until halfway through. There’s not this feeling in the air anymore when you walk out on stage and ask yourself, “Do they know?” That’s incredible!

You co-star in the upcoming Netflix series The Imperfects, a Canadian production set for release this year.
Yes, I got to spend kind of three-and-a-half months filming in lovely Vancouver last year. It was super cold and COVIDy at times, then it turned into summer, and summer is glorious in Vancouver! It reminds me of the better parts of Australia. Canada, you’re just a perfect country!

You have been to Montreal before …
I’ve done Just For Laughs a couple of times and it’s such a dream. Now I’m getting to do solo shows at Montreal Just For Laughs. That is a wild thing! I’m also really looking forward to watching the best comedians in the world do their acts.

Rhys Nicholson stars in his solo show Rhys! Rhys! Rhys! at Théatre Sainte-Catherine from July 21 to 29. For tickets, visit www.hahaha.com.