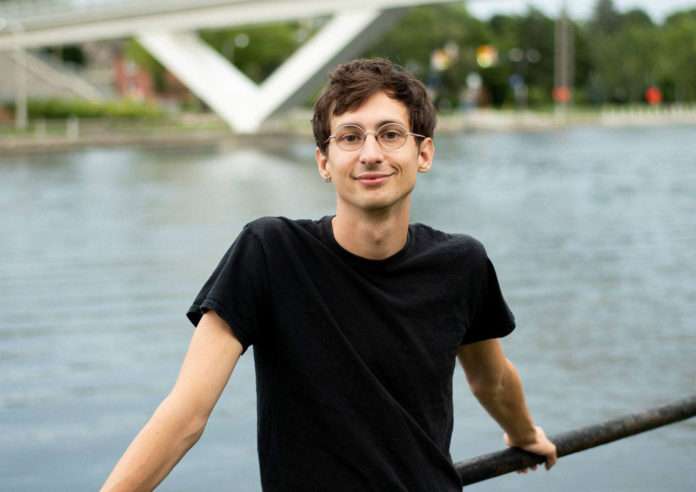 I’m a big fan of Montreal author Gabriel Cholette who burst onto the literary scene last year with his critically-hailed book Les carnets de l’underground, an uninhibited chronicle of the queer club scene. The book was beautifully illustrated by Montreal artist Jacob Pyne, and the new English translation, Scenes from the Underground (House of Anansi Press), was translated by Elina Taillon, making the trio a winning queer trifecta.

Scenes from the Underground tells the stories of a Montreal club kid getting his PhD in medieval studies who travels the world from Montreal to Berlin, exploring queer nightlife, gender identity, relationships, drugs and anonymous sex through the eyes of the “Instagram generation.” Cholette, 29, recently completed his PhD in French Language and Literature from the Université de Montréal, after getting an MA in French Literature from McGill University. I recently sat down with the fluently bilingual Cholette for a candid Q&A.

The interview has been edited for length and clarity.

Why did you write Les carnets de l’underground?
Gabriel Cholette : I realized I was keeping a lot of things from my friends and family.
My partying, my drug use. I decided I wanted to open up to everyone about it. So I started writing these as a short stories, telling the details of my underground life on Instagram. And they loved it. Then an editor contacted me on the first day I posted a story. It was my dream to become a writer but I never expected it would happen this way.

Your book was incredibly well-received.
Gabriel Cholette : It reception was so good it helped build my confidence. It helped me come out of my shell. I’m still not over it.

The rave reviews were also intergenerational.
Gabriel Cholette : Young people recognize themselves in the text. They feel seen. But the reception has been intergenerational. Talking to other men online who have reached out to me has been really nice. There’s this priest who talks to me now almost daily. He just came out of the church and now we’re in deep conversations about life and sex. Strangely, women in their fifties also love my texts. There is something there they connect with.

What was the reaction of your parents?
Gabriel Cholette : It brought me even closer to my mom. I think now we can talk about anything. And my dad (author Mario Cholette) was an underground kid in his age. I went through the same phases he did – rebellion and underground counterculture. He is also a poet and novelist, so I’m kind of walking in his footsteps.

How was your coming out?
Gabriel Cholette : I was really ashamed when I realized that I was gay because I had to lie for about six years. That left an imprint on me. Now I try to always speak my truth. When I did finally come out, it was wonderful. My parents took a moment to think about it and accept it. Mom did some reading online. She wanted to make sure that she didn’t do anything wrong. Now they’re close friends with my boyfriend. So that’s really good.

I thought that was fantastic. I wanted to impress him. So I invented that I was writing erotic short stories. That was not true at the time. Then going home, I told myself, “I can do that. I can write those stories.” And I started. Then I went back to Berlin and began a newsletter with a friend. When I returned to Montreal – Jacob and I were dating at this point – I was like, “We should collaborate on this.” He was as excited about it as I was. And we created the book. I feel like it’s a love letter to him in a way. We built something out of our relationship. The book came out of it.

Did you work closely with Elina Taillon for her translation?
Gabriel Cholette : She lives in Toronto, so she would write to me often. I really liked that our translator was not another gay white boy. I think the book is better in English because the rhythm flows. I was really inspired by the rhythm of the English language which is very dynamic. It also changes the meaning a bit. I think it gives it depth. Whenever Elina had a question, we would about talk it. It was very instructive to have these discussions because there’s always another way you can translate a sentence and I really liked her input on this.

What do you think of the term “Instagram Generation”?
Gabriel Cholette : The people of my generation developed their Instagram personas based on image and images taking a huge part of their life. I know people by their Instagram persona before meeting them in clubs. I really feel like my generation has been ingrained to think with images. I also think the Instagram Generation is over and now lost in time. That’s not where the younger kids are – they are now often associated with TikTok and will revolutionize the way we consume art because the rhythm is so quick. I think we’re going to be overwhelmed quickly by their by their way of understanding the arts.

How do you feel about the role of gay bars, gay neighbourhoods and Montreal’s Gay Village? Are these destinations still important to you?
Gabriel Cholette : Yes, these were the places where I first came out and developed my sexual identity and I think my identity at large. In Montreal, the Villages feels kind of abandoned right now. But it is important for people in the region. The Village is like a lighthouse for the gays from everywhere. Now there’s almost no reason to go there thanks to Grindr. We’re left with almost no queer spaces in the city. I think discovering raves was important for me because they are underground and outside of the Village. So they create these spaces, but they’re hidden and that’s what I don’t like about about it. I would like for a flamboyant return of the Village. I’ve been going out in the Village more and more recently, there’s something I find really comforting with this space. I’ve been going to the Black Eagle, it’s actually really gorgeous.

Are you a writer who happens to be gay, or are you a gay writer?
Gabriel Cholette : That’s a good question. I’m a gay writer. I want this perspective and this vision to be part of my work for my whole career. I think one day we’ll stop identifying people by their sexuality. At that point I won’t be a gay writer. But for now I’m a proud gay writer.

INFOS | Scenes from the Underground by Gabriel Cholette, illustrated by Jacob Pyne and translated by Elina Taillon, will be published by House of Anansi Press on October 4.

Cholette will read excerpts from Scenes from the Underground at Montreal’s Violet Hour queer reading series which will be outdoors in Place du Village (corner Saint Catherine Street East and Wolfe) on October 5 beginning at 6 pm.

A Parisian in Quebec