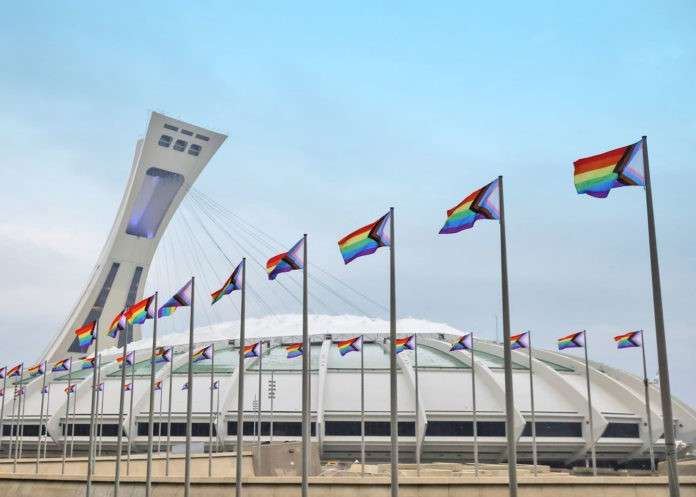 The major performances and activities of the 15th edition of the Montréal Pride Festival, presented by TD, with its inclusive and diversified programming, will take place from August 1 to 7 on the Esplanade of the Olympic Park as its main site, as well as in the Village and downtown. The announcement was made today by Montréal Pride as it unveiled a first series of artists whose participation in the Festival has already been confirmed.

A Pride in Tune with the Times
“What a joy it is to be able to plan — at last! — a reunion of the 2SLGBTQI+ communities at venues that are inclusive, accessible and in line with our ambitions. We are planning a resolutely festive edition that will be marked by the discovery or the rediscovery of both local and international artists,” said Simon Gamache, Executive Director of Montréal Pride. “We will not fail to celebrate the struggles and advances of all sexually and gender diverse persons, to highlight people who inspire us through their commitment and daring, to raise awareness of the issues facing our communities, and, of course, to advocate for equity for all,” he said. “Today, we want to signal our Pride as a force that is current, ambitious and unifying.”

A Memorable Opening in-Person!
“We are thrilled to welcome festival-goers back to an iconic space where they can once again connect with one another,” said Chris Ngabonziza, Director of Programming for Pride Montréal. “The opening show promises to be a memorable one as it will bring together the phenomenal Congolese-born Montréal DJ and songwriter Pierre Kwenders and the legendary Diane Dufresne, the first-ever Québec artist to fill the Olympic Stadium in 1984 with her unforgettable Magie Rose concert. The two headliners will perform on the main TD stage on the Esplanade of the Olympic Park on August 3, starting at 8 p.m.

International Headliners
Other performers announced include New York-based multimedia performance artist and gender nonconformist Alok, who will perform on Monday, August 1 at 8 p.m. at the Le National theatre in a humor-based show exploring gender, race, trauma, the sense of belonging and the human condition.

Brazilian singer-songwriter Pabllo Vittar is the most followed drag queen on social media worldwide with 35 million followers. Recognized as a “next generation leader” by TIME magazine, she will perform at the festival’s closing show on Sunday, August 7 at 8 p.m.

Two Local Faces for the FeminiX Evening
FeminiX, an evening, which celebrates sexually and gender diverse women, will feature, among others, Montréal-based queer and feminist rapper Calamine, whose solo album – Boulette Proof – earned her 2nd place in the Francouvertes Contest in 2021, one of the Révélation Radio-Canada nominations and the Prix Félix-Leclerc at the Francos de Montréal. Atikamekw-speaking singer-songwriter Laura Niquay, who recently released the album Waska Matisiwin (Circle of Life), will be presenting a sensitive and grandiose opus that better than ever lets her folk-grunge universe shine. FeminiX will take place on Saturday, August 6 at 7 p.m.

Events at the Olympic Park Esplanade, in The Village and Downtown
In order to improve the festival experience and in response to the growing popularity of the Festival, the 2022 Montréal Pride performances and shows will take place on the site of the Olympic Park Esplanade. The Festival will also be happening in the Village,notably during the Community Days on August 5 and 6, on Sainte-Catherine Street East and in downtown Montréal, where the Pride Parade will start from on Sunday, August 7.

“We are very pleased that Montréal Pride has found its place at the Olympic Park for several years to come,” said Sonia Provençal, Director, Commercial Development and Programming, Montréal Olympic Park. “The Olympic Park has always welcomed inclusive events and 2SLGBTQI+ events with open arms and will continue to do so.”

A virtual festival will also be accessible on the various Montréal Pride web platforms. More details regarding the artists and the programming will be announced in coming weeks.

About Fierté Montréal
Since 2007, at the initiative of Montréal’s 2SLGBTQI+ communities, the Montréal Pride Festival has been promoting their rights and celebrating their cultural richness and social advances. The largest gathering of the sexually and gender diverse (SGD) communities in the Francophone world, it works locally on a daily basis while serving as a beacon of hope for people living in 2SLGBTQI+ hostile regions of the globe.

Montréal Pride presents its activities in Tiohtia:ke, on the unceded Indigenous lands of the Kanien’kehá:ka Nation, whom we recognize as the custodians of the lands and waters on which we gather. Tiohtia:ke is historically known as a gathering place for many First Nations. Today, it is home to a diverse population of Indigenous and other peoples. We respect the continued connections with the past, present and future in our ongoing relationships with Indigenous and other peoples within the Montréal community.