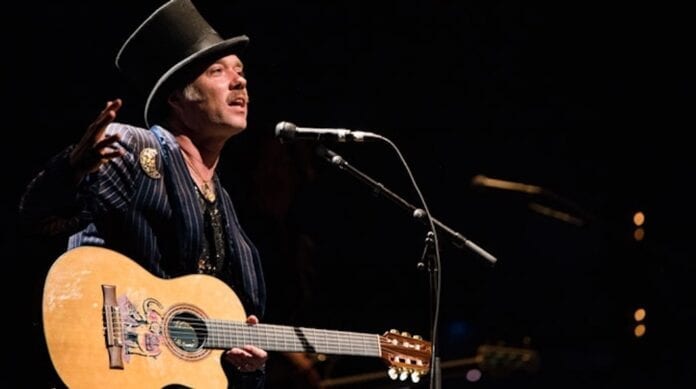 Elton John once famously said Rufus Wainwright is the greatest songwriter alive. Wainwright’s eponymously-titled 1998 debut album was named one of the best albums of the year by Rolling Stone magazine, and Rufus is currently celebrating the 20th anniversary of his debut album and its 2001 follow-up, Poses, on his All These Poses Anniversary World Tour, which brings him back to Canada in May. This was my 25th Rufus interview in the two decades I’ve been covering his career. This time I found him in Paris, and Rufus was fun, feisty and ever quotable.

You recently tweeted words of support for former US Vice-President Joe Biden who has been accused by a second woman of inappropriate touching. What are your thoughts about the #MeToo movement and have you ever had a #MeToo moment?

Rufus Wainwright : Nothing to write home about. But I support the #MeToo movement. I’ve had to reevaluate some of my past experiences in another light, and after some soul searching – as everyone has had to do – I’ve come to the conclusion that I am in the clear. The thing with Joe Biden, I had to put one positive word in there for him. When he was very touchy-feely with me, I found it a really heartwarming and beautiful statement, especially of an older straight man to a younger gay man because – in general – our relationships with our fathers can be quite fraught. I was also trying to be careful not to minimize what had happened to the woman because that is valid as well.

You also tweeted your support for George Clooney calling for a boycott of international hotels owned by the Sultan of Brunei because new laws in Brunei make gay sex punishable by flogging or stoning to death. What do you say to naysayers who complain that queers are being selective?

I think the important thing to remember about gay rights is that it can turn on a dime. It’s very much like anti-semitism. One minute you’re in the bag, and the next thing you know you’re in the oven. That’s pretty dark, but it’s pretty true. So you have to be careful. I don’t think gay people can ever get too comfortable. Just be aware that everything can change in an instant.

How was touring Japan on your All These Poses Anniversary World Tour?

I’ve had a very intimate relationship with Japan since my first album did very well over there 20 years ago. Having all the wonders of the Orient displayed before me like a kid in a candy shop, I was seduced.

Your loyal audience has grown up with you.

And I am very grateful. I remember being pretty young and working so hard on the albums, being incredibly uncompromising and brutal about my artistic needs, sometimes considering it a kind of gamble where people were ready to walk out and not work with me because I was so tense about my music. Now 20 years later, I still have those fans and new ones, and it feels like a vindication that the records have lasted.

Your opera Hadrian debuted at the Canadian Opera Company in Toronto in October 2018, and is a finalist in the World Premiere category at the 2019 International Opera Awards, which will be held on April 29.  Congratulations! Are you pleased with the reception of your opera Hadrian?

The experience was mind-bogglingly fabulous for an opera queen like myself, working with all that talent and having a full chorus at your disposal in that beautiful hall, the Four Seasons Centre. The general reaction was incredibly positive and there is light for this opera down the line, with other opportunities arising. The opera world didn’t genuflect, wasn’t on the ground kissing my feet or anything. But that’s not going to happen for possibly another hundred years. You got to play the long game in opera, and even detractors have to admit there is an interest in what I do from a large sector of that world. Opera is always such a battle and that in a nutshell is what I love about it.

Do you have more opera in you?

I would love to write three operas. I’ve written two, but I don’t intend to write the third one for many, many years. For now, in the right light, I still look somewhat like a rock star.

You are married, but I was wondering what you think of gay dating apps like Grindr and Scruff?

If it was around when I was younger, I don’t know if it would have been a good or a bad thing. Honestly, I think it’s such a double-edged sword. Certainly for people who live in more isolated areas of the world it’s an incredible asset. But I think in major cities it’s kind of a detractor because I always loved being in New York and going out to discover what was there and getting lost in the now.

I think you would make a fantastic judge on RuPaul’s Drag Race.

(Laughs) Well, you know, I know RuPaul somewhat. We used to work at the same movie theatre when we were very young in New York City. We were both popcorn boys! We were the queens of the popcorn machine back when there were no stars in the sky.

Do you have a favorite moment performing at Montreal’s legendary Café Sarajevo in the nineties?

Yeah, I was a big fan of my mom (late legendary singer-songwriter Kate McGarrigle) back in those days when I used to play late at night. She’d come to the shows and we’d have a kind of party and she felt part of the act was heckling me! She always inserted herself into my concerts, and Sarajevo was definitely the testing ground for that platform. I miss my mom heckling me.

I think it’s wonderful that you, Martha and the family continue to do your family Christmas concerts in Montreal each year, which also benefit the Stand Up To Cancer – Kate McGarrigle Fund.

As you know in my family we are blessed with the fact that many of us are musicians who tour for a living. That’s great, but sadly it also means we never see each other, we’re always in some other country. So the Christmas shows have definitely also become a way for everybody to gather and commune together. Now that we have kids of our own, it’s a nice way to get the circus started.

You return to Canada in May with your All These Poses Anniversary World Tour. What can we expect?

Well, it’s the 20th anniversary of my first two albums, I’m sticking to majority of that material, although there are a few surprises in there, some new stuff and covers. And I’ve got an incredible band whose members include Gerry Leonard who played with David Bowie, and Matt Johnson who played with Jeff Buckley. It’s a very expensive tour, so I want you to come!

When you return to Montreal for a show, where do you like to sleep overnight? Are you a hotel person, do you prefer to stay with family, or at the family home in Saint-Sauveur?

I like to stay with my sister (Martha) in Outremont, for sure, or go to Saint-Sauveur. Staying in a hotel in Montreal always seems strange to me. I feel like I’m cheating.

Last question: Miami Bar on the Main was a fabulous dive. Do you have a favourite anecdote from back in the day?

Well, I don’t remember much, frankly, but making out with an oil-rig worker from Calgary was one of my finest moments.

Rufus Wainwright performs live at the Grand Théatre de Quebec in Quebec City on May 21; at Salle Wilfred-Pelletier in Montreal on May 22; and at the National Arts Centre in Ottawa on May 23.

Winter in the Queen City