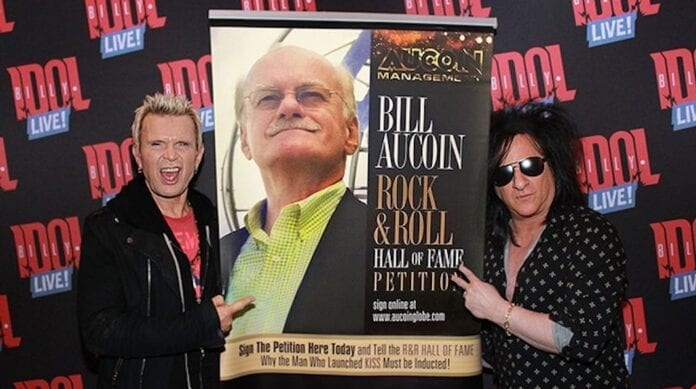 Bill Aucoin is the out gay man who made KISS superstars and got them into the Rock and Roll Hall of Fame. Now, Roman Fernandez – longtime life partner of Aucoin – is lobbying hard to get the late and legendary rock manager inducted into the Rock Hall too, with the help of many celebrity friends.

The growing movement to induct Aucoin – who died in 2010 at the age of 66 – will go into overdrive in 2020 with the theatrical release of Spinning Gold, a new Hollywood biopic about famed American record executive Neil Bogart who founded Casablanca Records, the 1970s home of KISS, Donna Summer, Parliament, Village People, The Isley Brothers, Gladys Knight, Bill Withers and Curtis Mayfield.

Filming began in Montreal on July 16.
After the films Bohemian Rhapsody and Rocketman, Spinning Gold is also expected to do boffo box office. The film stars, among others, Tony-nominated Broadway actor Jeremy Jordan as Bogart, Samuel L. Jackson as Parliament leader George Clinton and Neil Patrick Harris as Aucoin.

Aucoin not only made stars out of KISS, Billy Idol and Billy Squier, but masterminded the KISS blueprint that revolutionized merchandising. Between 1977 and 1979, KISS reportedly grossed $100 million from merchandise sales. The band also recorded some great albums. At their 2014 Rock Hall induction, drummer Peter Criss said, “I definitely want to thank our first manager, Bill Aucoin. We would not be here if it wasn’t for Bill.” In August 2019.

Lead singer Paul Stanley tweeted, “We could never have climbed the mountain without him.”

I recently caught up with Roman Fernandez to talk about his campaign to get Aucoin inducted into the Rock Hall.

There are just two managers inducted in the Rock Hall, Brian Epstein (The Beatles) and Andrew Loog Oldham (Rolling Stones). Why do you think Bill should be inducted?

Obviously I am biased because I had a relationship with the guy, but I have three solid reasons that stand him apart. He reached a certain level other managers hadn’t: he launched three acts to superstardom. He was also involved in merchandising, notably KISS, a format still used today. And he revolutionized the live performance experience with KISS. Bill came from TV so he was a very visual guy. He enabled KISS to take the Rock and Roll live show to the next level, a formula still copied today by the rest of the industry.

How out was Bill during his career?
We didn’t talk about that so much as he told me stories about what it was like to be gay in Rock and Roll back then. He didn’t go around advertising it. On the other hand, he never denied he was gay. Everybody knew that he and Sean Delaney – also widely credited with the rise of KISS – were a couple.

There are more out pop stars today. But Rock and Roll is a different beast.  Do you think being an out rock star is still a kiss of death?
No. But I think for acts that were launched in the 70s and 80s who may be closeted, it may be awkward to come out at this stage. I think for new acts, though, it’s much easier. It can even be an asset. Being gay has become part of the popular zeitgeist.

How do you feel about Neil Patrick Harris portraying Bill in the new Neil Bogart biopic Spinning Gold?
Isn’t that freaking awesome! You know, when Bill passed away (in 2010), the idea of a biopic was tossed around, and Neil Patrick Harris was the actor whose name topped the list. So talk about serendipity! Anyway, I know Neil is really into it and also really supportive of our cause.

How important is your petition to get Bill inducted into the Rock Hall?
The petition is important because it shows there is a public demand for this. We have the public support of many celebrities, such as Billy Idol and Steve Stevens, members of KISS, Megadeth, The Scorpions, The Runaways, The Doors, Dennis Quaid! I also think the Neil Bogart movie will help. We’ve had conversations with certain Rock Hall board members. This will be an uphill battle, but so was inducting KISS.

You and Bill were a couple for 15 years, until he died in 2010.
I’ve been partnered again, with my partner Joe of four years. But there isn’t a day that goes by when I don’t think about Bill. I do miss him. But it’s also almost like he never left, like he’s just away on a business trip. Part of my world still revolves around Bill. Here we are doing this interview about Bill. In a way, it’s like he never even left. Every day is reminder that he is gone, but every day is like he is still here.

How do you think Bill would feel about being inducted into the Rock Hall?
He was never one to rest on his laurels, but I think he would have been absolutely thrilled.

To support the induction of Bill Aucoin into the Rock and Roll Hall of Fame, sign the petition at www.InductBill.com.

An audience with Bonnie Raitt