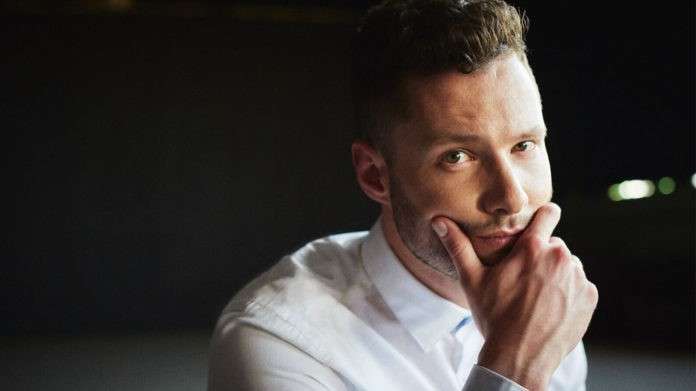 Breakout U.K. artist Calum Scott’s 2016 stripped-down cover of Swedish singer Robyn’s song “Dancing on My Own” has catapulted the East Yorskhire lad into a global pop phenomenon. The single quickly charted in 34 countries on Spotify, peaking at No. 1 on the Viral chart in six, including the U.S. It was the best-selling U.K. single of 2016 by a British solo artist, now has over 550 million streams worldwide, while the music video has a quarter-billion views.  Scott credits his initial success to being a contestant on the Britain’s Got Talent TV show in 2015, when he was a runner-up in the finals.

I recently sat down with Calum in Old Montreal where we talked at length about his coming out, dating apps, his getting advice from another out British pop star, Sam Smith, and the upcoming release of his debut album Only Human, out on March 9 on Capitol Records / Universal Music Canada.

How would you describe your experience on Britain’s Got Talent?
To go from appearing on that show to this – it doesn’t feel real. It’s a dream come true. I used to sit at my desk at work and dream of singing for a living. It’s a huge deal. During the show there was a lot of media, a lot of pressure. I don’t know how these little kids do it! I was 26-27-years-old at the time and it was terrifying for me! The nerves haven’t left me, though. I could be performing for 5 people or 5,000, and I always feel nervous. But nerves keep you on your toes. It makes me feel alive. It reminds me to always do the best job I can.

You worked in an office for eight years. What did it teach you?
My first job was collecting shopping carts at Walmart. After school, I got an apprenticeship for a job at city council for a few months before going straight to work in an office. I learnt to treat everybody with respect and make a good cup of tea. One of the things that’s so great about coming into the music industry so late in my life is that I have an appreciation of working to make ends meet. I understand hard work and getting paid a very modest salary. I also think I am grounded – I’m not a 21-year-old coming into this. I’ve done my growing up, I did my partying all night, worked my day job, so I’m not going off the hooks now, so to speak.

What was it like for you to hear yourself on a car radio for the first time?
I remember the first time vividly. I was in San Francisco doing some show there. I had heart palpitations! Thank God I was sitting down.

What is it like to be the centre of attention in every room you walk into?
I am self-conscious. But it is work, so you have to be on. You have to expect people will come over to take pictures. It’s bizarre, really. I guess there is a bit of paranoia. It’s kind of like eating – you feel like everybody is watching you, staring at you. It’s a little bit daunting.

Does fame make meeting guys more difficult?
Yes, because you just don’t know what people are really meeting you for. The public side of me comes before the personal. If you want to get personal with somebody, it’s like you have to work alongside your public profile. I also worry if things don’t go right, then they have a story they tell everybody.

Are you on any dating apps?
Since I came out and am more confident, I can now put myself out there. I’m not on Grindr, but I am on dating sites like Tinder and Chappy. On Chappy I had trouble uploading my pictures because they thought I was a catfish. I’ve gone on a few dates.

Do you fear if something goes wrong that your date will trash you to others?
Yeah! There this was this guy I met on Tinder after the fame. He knew who I was but didn’t care, which was nice. Then the relationship became a bit deep for me and I was like, “I don’t want to hurt you. You’re a lovely guy but I don’t want to be attached at the moment.” He took it kind of badly and said, “Well, I spoke to all of my friends and they’ve all taken my side.” He is one example of a relationship ending well. Imagine when the ball really rolls out of control. They can bullshit –“He’s got a tiny dick, he’s bad in bed, he only lasted a minute.” Every time you go out on a date or to a club, you think if it goes further, if it goes to the bedroom, will this person start talking shit? You are always conscious of this and it can ruin it for me.

How would you describe your coming out process?
I only came out publicly a couple of years ago, but I came out to my friends when I was 14. I always knew I was different. I was never into girls. When I explained it to a friend, he said, “Are you trying to tell me that you’re gay?” I said I didn’t know. So he told all my friends and they all abandoned me, which was horrible and devastating.But I had a gay best friend – Dan – who helped me out. We’re still best mates some 14 years later. With Dan’s help, I told my mom shortly afterwards and she accepted me straight away. My family accepted it, but I didn’t tell my Dad (who lives in Ontario, Canada) about it until two years ago. He took it well, said he always had a feeling I was gay. After I told my parents, I felt liberated.

Were you afraid that coming out might ruin your career?
Yes I do. I prefer it to gay. I define my queerness not just as sexuality, but a (philosophy) that informs my art and how I see the world. My life has been queer in that it has been a little bit different and othered, and that has always given me a unique perspective of the world since I was a kid.

Can you imagine not being out?
Oh God yeah. Before I did “Dancing on My Own” I told the label I didn’t want to discuss my sexuality. I was terrified I would lose fans.

What kind of advice did your friend Sam Smith give you about coming out and living your authentic self?
People always assumed that I am straight. When people asked me if I had a girlfriend, I always climbed up with that question and said, “Oh no, I’m too busy.” Whereas now I say, “No, I’m gay.” I soon as I got that nailed, the more I said it, I felt more and more liberated. There was a point where I felt I could shout it from the rooftops. I was so secure with my family, it gave me the room and time to love myself. Once I got that, I’ve never looked back. I am proud of my sexuality. When I met Sam, it was a little bit after I (publicly) came out. It was lovely just to have him give me advice about the industry. We were recently texting, talking about coming out. I told him how I used to hate myself and felt very ashamed and he said he had gone through the very same thing. I think all of us have at some point.  Sam and I have stayed friends. You are excited about your debut album Only Human. The music on the new album is a varied mix. People assume it will be ballad, ballad, ballad. But I don’t want to be that guy. I am not just an emotional mess! “You Are The Reason” is the first single from the album, we shot the music video in Ukraine and it highlights all the different aspects of love. Everybody is different. I’m also doing a lot of concert dates and I would love to perform in North America. I’ve only performed in Canada once, in Toronto, which was special because my dad was there. I would like to tour America, but Canada has a special place in my heart because my family is here. I hope to add some concert dates in June.