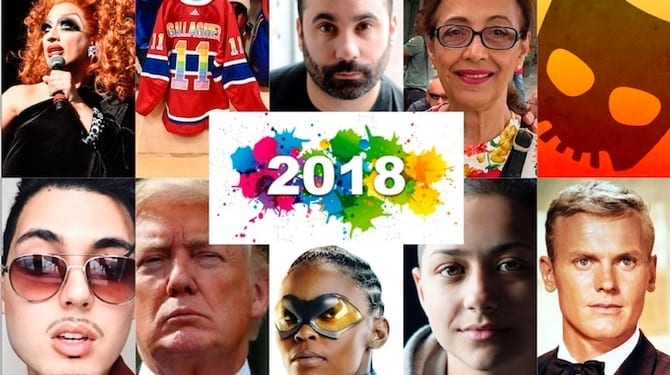 Here is Richard Burnett’s 23rd annual column of the year’s heroes and zeros.

ZERO  McGill University, who renowned Montreal author Will Aitken – in an Oct. 29 open letter in the McGill Tribune – accuses of homophobia in the 1970s when, “as a queer man writing a thesis about the queer Anglo-American writer Christopher Isherwood, I identified as queer in the preface to the thesis. This set off a year-long battle, during which the English department was fully committed to failing my thesis for that very reason. They only backed down after I hired a lawyer and with the help of many friends made their bigoted behavior an issue in the media. I did finally receive my MA—I believe it was the first openly queer thesis written in Canada (but would certainly welcome evidence to the contrary). I never received an apology from the McGill English department or from the university itself.”

HERO Alberta’s Ministry of Education, for instructing 28 privately-run schools to comply with legislation permitting gay-straight alliances – or risk having their funding pulled in 2019.

ZERO  Kansas high school teacher Justin Adrian, busted for hooking up with an 18-year-old student in a classroom during school hours. They met on Grindr.

ZERO   Grindr, who, Buzzfeed reported on April 2, shared the HIV status and location data of their users to third parties. Following publication of Buzzfeed’s exposé, Grindr said it would stop sharing this information.

ZERO  Dar es Salaam governor Paul Makonda, for creating a 17-member squad to round up and arrest LGBTQ Tanzanians in an anti-gay crackdown.

HEROES  The 1,000 LGBTQ activists who gathered at Taksim Square in Istanbul for that city’s fourth annual Pride march on July 1, defying an official ban by Turkish authorities, and dodging police tear gas and rubber bullets.

HEROES The brave 120 marchers who took part in first Pride parade in Bridgetown, capital of Barbados, on July 22. First-ever Pride marches were also held in Guyana on June 2, Swaziland on June 30, and in the Kakuma Refugee Camp in Kenya on June 16. Some 180 LGBTQ refugees attended Pride in Kakuma, the third-largest refugee camp in the world, filled with 185,000 refugees.

HERO  The High Court in Trinidad and Tobago, which on April 12 ruled sex between same-sex adults is legal.

HERO  Bermuda’s Supreme Court which on June 5 overturned that country’s ban on same-sex marriage. The government has appealed the ruling.

ZEROES  Photographers Bruce Weber and Mario Testino, whom The New York Times reported on Jan. 13 have been accused by several male models of unwanted advances and coercion.

HERO Federal Court Justice Martine St-Louis, who on June 18 approved a historic deal to compensate LGBTQ members of the Canadian military and other agencies who were investigated and fired because of their sexual orientation. The final settlement could add up to $110 million in total compensation.

HEROES  The new wave of out and proud pop stars, such as Troye Sivan, Olly Alexander, Hayley Kiyoko, Janelle Monae and Brendon Urie.

HERO  Kenyan High Court Justice Wildrida Okwany, for temporarily lifting the ban on Kenyan lesbian-themed feature film Rafiki, so it would be eligible to be entered for a foreign-language Oscar.

HEROES  The New York Yankees, who announced an LGBTQ scholarship program to commemorate the 50th anniversary of the Stonewall Riots in 2019; and the Boston Red Sox, who pledged $200,000 to support its neighbourhood LGBTQ health centre, Fenway Health.

HERO  Retired Montréal Canadiens hockey player Georges Laracque, who won a Montréal Pride drag competition on Aug 10, and donated his $1,000 prize back to the non-profit festival.

HEROES  The Montréal Canadiens, for wearing “Le hockey est pour tout le monde” jerseys before auctioning them off in February, to benefit GRIS-Montréal and You Can Play.

HEROES  The 14 out LGBTQ athletes at the PyeongChang 2018 Olympic Winter Games, which hosted 3,000 athletes from around the world. Montreal figure skater Eric Radford became the first-ever publicly out gay man to win a gold medal at the Winter Olympics, and Dutch speed skater Ireen Wüst won her 11th Olympic medal, the most of any LGBTQ athlete.

ZERO  Sailors Sauna in London, England, which on Oct. 29 kicked out a trans man for not having male genitalia, despite showing identification confirming his male gender.

ZEROES  Heather Barron and her boyfriend Kareem Leiva, accused of torturing and murdering Barron’s 10-year-old son Anthony Avalos on June 21, after Anthony reportedly came out as gay. May Barron and Leiva rot in hell.

ZEROES  The thugs who attacked Montrealer Nidal Chawqui outside Complexe Sky nightclub in the Village on Nov. 3. Hats off to Chawqui for bravely going public with his story.

ZEROES  Montreal police, who treated legendary Montreal trans performer Atif Siddiqi (a.k.a. Tranie Tronic) dismissively after Siddiqi (who prefers the pronoun “they”) reported they were sexually assaulted and robbed in March. Hats off to Atif for bravely going public with their story.

HERO  Toronto’s trailblazing Buddies in Bad Times Theatre, which turns 40 during their current 2018-2019 season, and a hero despite their unfortunate estrangement with Buddies co-founder and former artistic director Sky Gilbert, following the cancellation of the Nov. 19 reading of Gilbert’s 1986 play Drag Queens In Outer Space, after Gilbert published a poem entitled I’m Afraid Of ‘Woke People’ on his website on Nov. 10. The poem was addressed to trans author Vivek Shraya in response to her recently published book I’m Afraid Of Men.

ZEROES The London District Catholic School Board and the Thames Valley District School Board in Ontario, who withdrew their financial support for the Grand Theatre’s High School Project which presented Prom Queen: The Musical, based on the true story of gay Oshawa teenager Marc Hall’s 2002 fight with the Durham Catholic School Board to bring his boyfriend to the prom. A crowdfunding campaign enabled the musical to run at the Grand Theatre from Sept. 18 to 29. The critically-hailed musical originally premiered at The Segal Centre for Performing Arts in Montreal in 2016.

HEROES  The good folks at theatre icon Andrew Lloyd Webber’s The Other Palace theatre in London, England, which presented a July 2 musical workshop of Prom Queen: The Musical ahead of a planned Broadway run. For good measure, Webber himself was in attendance.

ZERO  London Pride in the UK, for failing to remove some 10 anti-trans female protestors who pushed their way to the front of the July 7 parade, waving such signs as “Transactivists erase lesbians.” Instead, organizers let the transphobic campaigners lead the parade.

ZERO  RuPaul, who ignited a firestorm in March after telling The Guardian that he would “probably not” allow a trans woman who had undergone gender-confirmation surgery to compete on RuPaul’s Drag Race. RuPaul later apologized.

HERO  Filmmaker Joshua Ferguson, who successfully petitioned the Ontario government to issue its first non-binary birth certificate on May 7, when he had the document changed from “male” to “non-binary.” People can now choose between “M” for male, “F” for female and “X” for non-binary, or opt not to display a sex designation on the birth certificate at all. Gender-neutral birth certificates are also available in Newfoundland and Labrador and in the Northwest Territories.

HERO  Black Lightning, the Black lesbian superhero TV series, based on the DC Comics character, which premiered on the CW on Jan. 16.

ZERO  Toronto police and their police chief Mark Saunders, accused by many LGBTQ activists of mishandling missing persons investigations and community fears there was a serial killer in their city, before the arrest of alleged serial killer Bruce McArthur on Jan. 18.

HERO  Pride Toronto, for announcing that Toronto police can march in their 2019 parade. In a Dec. 1 op-ed in Now magazine, Pride executive director Olivia Nuamah wrote, “Pride’s strategy has never, ever been isolation. It has been tireless and continuous negotiation.”

HERO  New South Wales, the first state to introduce its groundbreaking government-funded trial for PrEP which is credited for the lowest HIV rates in NSW in 33 years.

HERO  British Columbia, which agreed to supply PrEP for free beginning on Jan. 1. More than 2,000 individuals were prescribed PrEP in BC between Jan. 1 and July 1.

HERO  My mother Liliane Laventure Burnett, who as “Marraine” saved the historic first-ever Pride Inter-Iles de l’Océan Indien held in Mauritius, the country of her birth. Affectionately known as “Diamond Lil,” my Mom is the daughter of legendary Mauritius politician Felix Laventure. “If you were not here, the authorities would have shut us down,” CAEC organizer Pauline Verner told Diamond Lil who played a key role – alongside Pride organizers, their lawyers, and French politician and festival “Parrain” Jean Luc Romero – in fighting back when more than 100 death threats from religious extremists in Mauritius nearly derailed the Pride celebrations on June 2. Thanks to her efforts, a national public dialogue about LGBTQ civil rights and justice was launched in that conservative island nation.