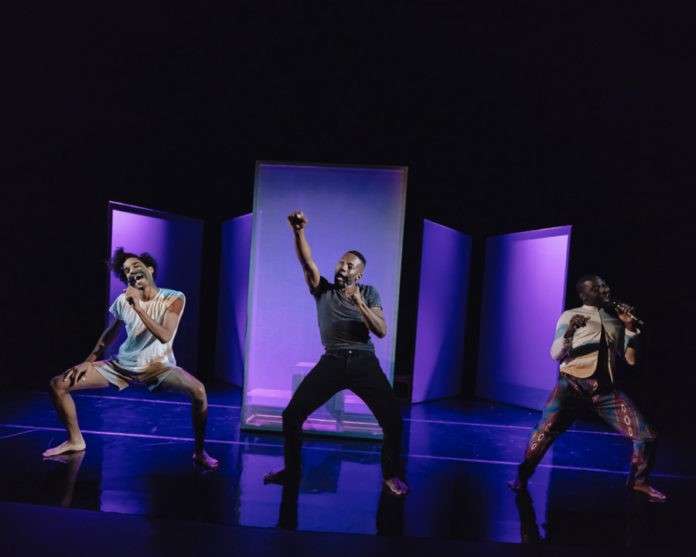 Race and sexual identity are just two of the many themes explored in the acclaimed show «Black Boys» created by the Toronto-based Saga Collectif. In November 2016, the play had its world premiere at Buddies in Bad Times Theatre where it had been developed in the Buddies Residency Program.

Shortly afterwards, the Toronto Star likened Black Boys, the film Moonlight, the Fox prime-time soap Empire and other shows were part of a “black queer renaissance.”

Or, as Les Fabian Brathwaite wrote in Out magazine earlier that year, “For the first time since perhaps the Harlem Renaissance, the souls of queer Black folk have been depicted on our own terms as we take control of our narratives… This is the new renaissance.”

Created by the cast – on whose lives the play is based – with choreographer Virgilia Griffith and director Jonathan Seinen, Black Boys explores queer male Blackness, how these three Black men seek a deeper understanding of themselves, of each other, and how they encounter the world. Jackman-Torkoff, M’Carthy and Olajide have been seen on the stages of the Shaw Festival, the National Arts Centre, Canadian Stage and the Stratford Festival, and reprise their roles when Black Boys opens at Théâtre Espace Libre from February 14, a co-presentation with Black Theatre Workshop, the oldest professional Black theatre company in Canada.I recently sat down with Stephen Jackman-Torkoff for a candid Q&A.

Your show’s five creators got together in 2013 after you graduated from the National Theatre School in Montreal. What will we see?
Stephen Jackman-Torkoff: The stories we perform are mostly our own. When we started it was mostly improv. When we did improv, we also drew from other sources, other people we know. (Today) there is a script that we follow, but we have a lot of freedom. I can play around with some lines as long as I don’t mess it up too much. I’ve changed, so I like to bring in some of my new experiences from the past year. While our stories embody universal themes, it is a very personal show drawn mostly from our three different experiences.

What were your audiences at Buddies like? White? Black?
The audiences were pretty mixed, though because of the content, I think there were more Black people and more people of colour than usually come to the space, which is great. But the demographics changed from night to night, and that also changed the way people reacted to the play. Regardless of the make-up of the audience, they were consistently enthusiastic audiences. And the make-up of the crowd doesn’t change the way we approach our work. We give it our all every time we go out there.

What is it like to be a Black man performing this show for white audiences?
You feel vulnerable in different ways but we’re not nervous or scared to perform it. I have my own balance of what Blackness is. I am mixed race. I grew up in an all-white foster family, so when I get asked questions in front of an all-white crowd, it’s always a negotiation. And because it is so personal, I want it to be a healthy experience emotionally for me.

In creating Black Boys, how did your experiences line up with those of your co-stars?
The Black thing, I do identify with that, but that was recent because of where I come from. There were challenges of how our experiences lined up. We bring this up in one of the scenes called “Amazing Grace” where we talk about how I become the person who is challenged a lot, based on my experience being lighter (skinned). We have built a safe space for each other where we can challenge each other without taking it personally.

What was it like when your Mom first saw Black Boys?
It was definitely a learning experience for her. She has always been so open, but these conversations are conversations that came about because of who I am and the circles of people I’m in.

You’re 25. You were younger when you studied at the National Theatre School. What was that experience like?
I was very young. Montreal was also where I had my own place for the first time. It felt like the most poetic, beautiful and exciting time of my life. Montreal touched my heart. I had a great time here exploring my sexuality.

Does Montreal still influence you?
Montreal is where I found my freedom. Afterwards I moved to Niagara-on-the-Lake to work at the Shaw Festival, which was a very different experience. I am a shape-shifting person. Still, I have held onto that Montreal energy.

What city do you now call home?
I just tell people that I live in Canada. I suppose Toronto is the city where I am based. Though in the past year I have spent as much time in Toronto as I have in Vancouver, where I spent four months doing a show. The rest of the time I spent on road trips. So I move around a lot. Right now I find that completely liberating. After the Black Boys tour, I am doing The Glass Menagerie in London, Ontario. Then later this year I will tour with the Queer Songbook Orchestra, a professional Toronto-based chamber pop orchestra that tells personal stories, and I am their resident poet. We hope to tour many small towns and cities where people don’t have much access to queer-oriented shows.

Do you like the word queer?
Yes I do. I prefer it to gay. I define my queerness not just as sexuality, but a (philosophy) that informs my art and how I see the world. My life has been queer in that it has been a little bit different and othered, and that has always given me a unique perspective of the world since I was a kid.

Can you imagine not being out?
I just want to be myself. I have always written from a personal place. I can’t imagine censoring who I am. I have been in so many queer-oriented productions – and there are more and more of them each year – so I don’t feel being out has slowed my career. I am who I am.