A colleague first and foremost 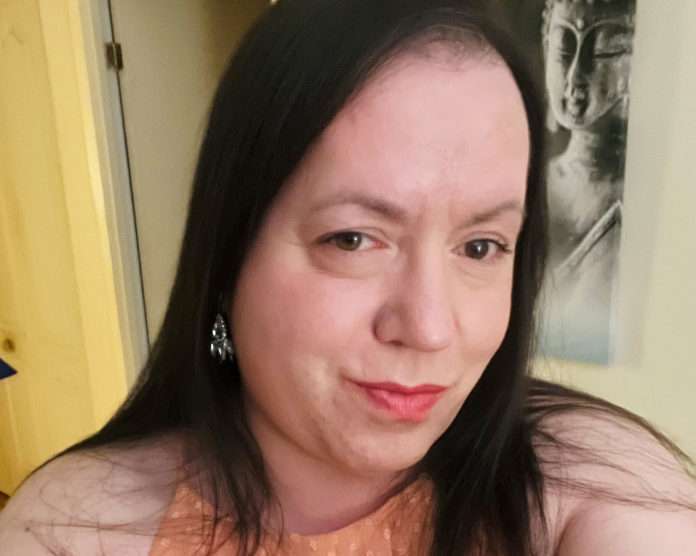 Gina Vallée is a Customer Service Agent at Desjardins. She has a rich voice and a gift for easy conversation, the lingering benefits of 10 years in radio. She’s proud to be a workplace ambassador. “I’ll gladly share my journey if it can help people who are holding back from living life to the fullest for the sake of their career,” she says. Her well-groomed appearance earns her compliments from her colleagues, who aren’t bothered by the fact that she was born “Gino.” This is her story.

Never too early, never too late
Gina chose to leave the media industry in 2016 so she could come out in private, away from the public eye. Her only regret is that she didn’t do it sooner. “Every day you live in denial is a day you’ll never get back,” she confides.

Her career change and job search are punctuated by anecdotes, ranging from comical to uncomfortable (a first interview is definitely not the best time to ask a trans person about their bathroom preference).

“All companies demonstrate inclusiveness during the hiring process. It’s a few months later that you find out if it’s sincere,” Gina explains. She’s found herself in organizations where their noble values aren’t always reflected in their employees’ behaviour. That is, until a door opened up at Desjardins.

What’s in a name?
Even before Gina submitted her CV, a friend reassured her: “Desjardins is in a league of its own.” Just before her 43rd birthday, Gina accepted a temporary position for a few months, which ended up becoming permanent. She feels at home there and is supported by her colleagues.

There’s just one nagging issue. When Gina was hired, she was told that for legal reasons, her male pseudonym would need to be used in certain places, like for her email address and her IT access. A detail that may seem insignificant but that serves as a constant reminder of a part of her life she thought she’d left behind. Like a stone in her shoe that keeps her from moving forward.

Being part of the Desjardins family
Gina talked about this at a panel on diversity and inclusion. This led to a virtual meeting with Mario Lapierre, Vice-President, Specialized Services and Online Business Centre Division, who was touched by Gina’s testimonial and saw an opportunity to help the organization grow. He said, “You’re Gina. You’re an important employee. You’re part of the Desjardins family. Wherever it’s possible to use your female name, we’re going to do so.” After that meeting, Gina’s pseudonym and email address were changed. Her manager also asked her to be an ambassador for LGBTQ+ people at Desjardins.

Talking about it to help others
Gina feels lucky that she got support from her friends and family when she came out. She agreed to offer some advice on inclusion in the workplace, noting that every person’s journey is unique.

To people revealing their identity
Don’t worry about your career. “Don’t disrupt your sleep, your mood or your performance by worrying about what could happen at work. Choose what makes you happy. Clear your mind to help you move through the process.”

Talk about it to one person, then another, then another: “Support from your family, friends and colleagues is important. Confide in someone you’re comfortable with, and then broaden the circle at your own pace.”

To their colleagues
Congratulate the person on coming out: “It takes courage to do that. Be sincere, take an interest in the person and schedule a time to talk in a relaxed setting to ask them questions.”

Respect the identity choices of those around you: “Communicate with the person based on the gender they identify with. Use their first name and their preferred pronouns, like he, she or they.”

Gina is grateful that, despite the current labour shortage, Desjardins gives her the time she needs to carry out her ambassador role, like doing this interview. “I’m quite happy to talk about it, but I hope we won’t need to be talking about it in 10 years’ time. I hope by then it will just be part of life.”

International Day Against Homophobia and Transphobia: A source of pride for Quebec
On May 17, 1990, the World Health Organization acknowledged that homosexuality is not a mental illness. In 2003, to celebrate this major victory, Quebec-based Fondation Émergence created the first International Day Against Homophobia and Transphobia. The event is now celebrated in over 20 countries. Every year, Fondation Émergence develops educational tools that are translated into 20 languages to raise public awareness about a specific aspect of the reality of the LGBTQ+ community.

Creating LGBTQ+ friendly workplaces
How can we build a more inclusive and diversified work environment? That’s the focus of Fondation Émergence’s ProAlly program presented by Desjardins. This short training session, which lasts between 90 minutes and 3 hours, teaches basic concepts like gender identity, sexual orientation, gender expression and the specific issues LGBTQ+ people face in the workplace, as well as inclusion best practices. Each presentation is accompanied by a testimonial from a person from the community, chosen based on the participating organization.

Why? Because it’s the law!
Gender identity and expression are recognized as grounds for non-discrimination under Quebec’s Charter of Human Rights and Freedoms. “Legally, companies have a responsibility from the time a person is hired until the end of their employment,” explains Laurent Breault, General Manager of Fondation Émergence.

Inclusion fosters innovation
A study by Deloitte (in French only) reveals that 80% of managers interviewed consider diversity and inclusion to be competitive advantages.[1] In addition, companies with equal opportunity and gender equality policies are nearly 60% more likely to have a better reputation, generate more creativity and innovation, and see higher profits and productivity.

“Transidentity is often a barrier to finding a job. When a trans person feels safe, involved and engaged in their workplace, it’s normal for them to want to stay there,” adds Laurent Breault.