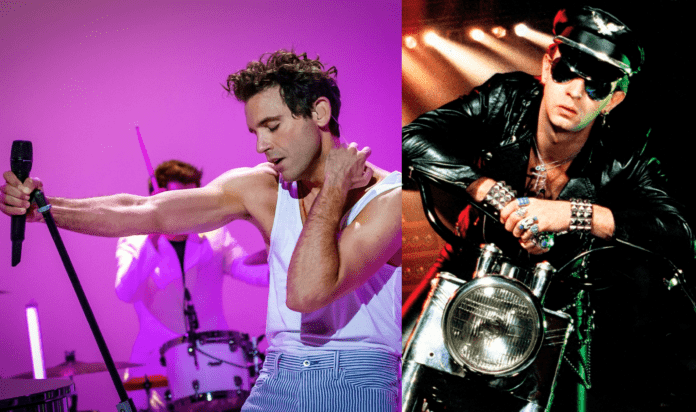 Pop star Mika and Judas Priest frontman Rob Halford are famously out British icons. Though two generations apart – Mika is 38-years-old and Halford is 70 – each endured life in the closet at the peak of their fame.

Both continue to sell out arenas: Mika headlines the Bell Centre on April 9 and the godfathers of Heavy Metal, Judas Priest, headline Place Bell on April 11.

When I first met Mika in Old Montreal back in 2009, the tabloids had been obsessing over his sexual orientation since he’d exploded on the charts with his debut album, Life in Cartoon Motion.

When I asked Mika about the gay rumours, he poker-face deflected my question like a seasoned pro. We then sat together at a piano before he turned to me, legs crossed and, pretending to hold a cigarette, did his finest imitation of Freddie Mercury.

Mika looked fabulously fey. “And he holds his beer like this,” Mika continued, imitating Mercury from the famous backstage British TV interview on the Queen – We Will Rock You: Live in Montreal 1981 DVD. “And he hardly drinks it!”

It was like Mika and I were talking in code.

A decade later—then publicly out—Mika told me, “That interview is something straight out of Absolutely Fabulous!”

Fittingly, the emotional centerpiece of Mika’s 2015 album No Place in Heaven is the beautiful ballad “Last Party,” an ode to Freddie Mercury.

“That song started with this idea that I had, when Freddie found out that he had AIDS, he closed himself up in a nightclub and had a crazy party for three days, with drugs and everything,” Mika told me at the time. “It was the worst possible thing to do after discovering that kind of news, but that’s what he did. That’s why that song is called “Last Party,” and it’s one of the saddest songs I’ve ever heard.”

Sadness also fills Rob Halford’s memories of Mercury. Halford, who codified metal’s signature leather man look, struggled with the Rock and Roll closet for more than two decades, with no release, epitomized by the night he saw Mercury in a bar in Athens, Greece.

“I saw Freddie, it must have been in the early 1980s, and I was going to Mykonos with friends from London via Athens,” Halford told me. “We got to the hotel and did what we all did then – the clubs, the parties. At one club Freddie was holding court at the other end of the bar. We were two ships passing in the night. He waved, I waved. The place was packed and we never got the chance to connect. The next day we all went to Mykonos and I was on a beach when his yacht sailed by.”

Halford quit drinking and drugging in 1986. He not only wanted to live, he explained to me, but wanted to protect his four-octave vocal range. Coming out also saved his life: he has lived an out-and-proud heavy-metal life ever since he came out on MTV in 1998 – the first metal icon to announce that he is gay.

Today, Halford is adored by metalheads worldwide, including Lady Gaga.

“For so many years I was the gay man in the heavy-metal closet,” Halford says. “It was a double life for me. I couldn’t go to gay bars after a show. I couldn’t be out with my own people because of the fear of doing damage to the band and everybody else. My life was the classic example of putting everybody else first and putting yourself second. Which is the worst you can do to yourself.”

“I think coming out saved my life mentally,” Halford adds. “We go through mental anguish as we try to find peace with our sexual identity. Sharing our truth with family, friends and coworkers is incredibly powerful, and I think in the LGBTQ community we are powerful strong people. We have to deal with so much pushback. We are still kicked around like a football. We’re pushing back constantly. My coming out on MTV was unplanned. But a massive burden was released and nothing but good came from it.”

Fourteen years after Halford came out, Mika did in 2012, to the surprise of no one. When we spoke in 2019, there was a new generation of young out-and-proud pop stars climbing the charts. So, I asked Mika, is it easier to be an out pop star today than when he first came on the scene?

Mika paused for a moment, then said, “It depends. I think in some ways it is. In the most cynical part of our business, which is the very commercial side, it is easier now. But let us not forget it is easier in a very specific type of music. Other genres of music are definitely not as tolerant. And let us not forget that North America is not the world and taking North America as the world is a huge mistake. That said, it’s dangerous making generalizations about individuals and everyone has to go through their own journey, their own path, their own challenges.”