Year in Review: Heroes and Zeros 2019 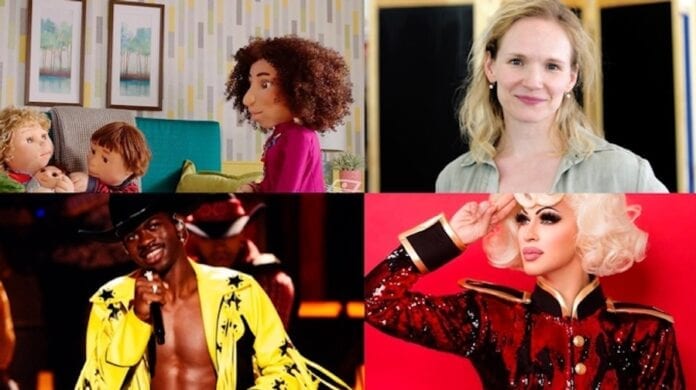 Here is Richard Burnett’s 24th annual column of the past year’s heroes and zeros.

Hero  Reggae Dancehall legend Eek-A-Mouse for performing with a Rainbow flag in June while singing, “Jesus loves everyone whether gay or lesbian.” He dealt with the backlash in his pro-gay Controversial Song released on August 8.

Zero Comic actor Kevin Hart, for stepping down as host of the 2019 Oscars after refusing to apologize for his anti-gay Tweets.

Hero  Billy Porter, who on September 22 became the first openly-gay Black man to win an Emmy Award for Lead Actor In a Drama, for Pose. Porter also took issue with Kevin Hart’s homophobic Tweets, saying in an interview, “You turn around and oppress other people the same way you’re being oppressed. Fuck you.”

Hero  Russian LGBTQ activist Yelena Grigoryeva who was fatally stabbed in St. Petersburg on July 21 after her name was listed on a website that encourages people to “hunt” LGBTQ activists.

Hero  Merriam-Webster for adding the nonbinary “they” to their dictionary on September 17.

Hero   Télé-Québec TV series Passe-Partout for introducing character Madame Coucou as lesbian in their May 6 episode.

Zero  The Harford County Liquor Control Board for, in May, warning Maryland bars they could lose their liquor licenses if they present “adult entertainment” drag shows.

Hero  Brazil’s Supreme Court which on June 13 ruled to make homophobia and transphobia a crime.

Zero  Actor Jussie Smollett who claimed he was the victim of a racist and homophobic attack on January 29.

Hero  Actor George Clooney for starting the international boycott of nine luxury hotels with links to Brunei, after that country announced gay sex would be punishable by death beginning on April 3. Meanwhile, Montreal-born Omar Sharif Jr. Tweeted on April 1, “I think it’s egregious to out people; in this case, I think it’s warranted. I will volunteer myself second to be executed according to Brunei’s new anti-LGBT law on the condition that the Sultan’s son is first, and that the Sultan himself cast the first and last stones.” Faced with growing boycotts and condemnation, Brunei’s ruler, Sultan Hassanal Bolklah, backed down on May 5.

Zero  Iran, for charging famous Iranian-Kurdish singer Mohsen Lorestani with “corruption on earth” – i.e. being gay – a charge which carries the death penalty.

Heroes    The 100 Cuban LGBTQ activists who defied their Communist government to hold an unauthorized Pride March on May 11, after authorities cancelled that country’s 12th annual Pride march. There were at least three arrests after clashes with police.

Zero   The Anglican Church of Canada, whose vote to approve same-sex marriage failed to pass at its general assembly on July 12.

Zero    Nivea, who were dropped by the FCB advertising agency after a Nivea rep allegedly said “We don’t do gay at Nivea” when shown an ad with two men touching hands.

Hero   Always sanitary products, who announced in October it will redesign its pad products to be more inclusive: Always will remove the Venus symbol – used to represent the female sex – from its products to be inclusive of transgender and nonbinary customers.

Hero   The University of Winnipeg, for launching their Two-Spirit Archives, the first in Canada. Longtime two-spirit activist Albert McLeod donated most of the items in the archives.

Heroes  The thousands of Alberta students who walked out of their classes on May 3 to protest Premier Jason Kenney’s position that parents be notified when their children join gay-straight alliances  at school.

Heroes    Residents of Chilliwack, B.C., who painted 16 Rainbow crosswalks on their private properties in November after city council voted against painting a Rainbow crosswalk in town to support LGBTQ Pride.

Zero   U.S. President Donald Trump. On November 4, the Trump Administration announced the immediate repeal of sexual orientation and gender identity nondiscrimination provisions in federal health regulations, capping a year of actions by the administration undermining the health and well-being of LGBTQ Americans and those living with HIV.

Hero   Pitcher and LGBTQ civil rights advocate Sean Doolittle of the World Series champion Washington Nationals of Major League baseball, for declining an invitation to a White House ceremony because he disagrees with the policies of Donald Trump, not to mention Doolittle’s wife has two mothers.

Heroes   The Vancouver Canadians, Class A minor league team for the Toronto Blue Jays, for hosting their inaugural Pride Night at Nat Bailey Stadium on July 23; and the Los Angeles Dodgers, whose LGBTQ Night on May 31 was the team’s most-attended game in seven years.

Hero   South African intersex athlete, middle-distance runner and two-time Olympic gold medalist Caster Semenya who on May 1 lost her case at the Swiss-based Court of Arbitration for Sport to compete as a woman in all races.

Hero   The International Football Federation (FIFA), for enforcing its new code banning racist and homophobic behaviour by players on the field, and by fans in the grandstands.

Zero   The FGG – which licenses the Gay Games – for announcing on November 11 that they remain committed to holding the 2022 Gay Games in Hong Kong despite the pro-democracy protests. This, from the same organization that revoked Montreal’s right to host the 2006 Gay Games because they disputed Montreal’s projected attendance figures (which would have been accurate when you combine the numbers of the 2006 Montreal World Outgames and the FGG’s 2006 Chicago replacement games).

Zero   Gay anchorman Shepard Smith who – after 23 years at virulently partisan and conservative Fox News – announced his resignation from Fox on October 11 (on National Coming Out Day).

Hero  The Bill and Melinda Gates Foundation for donating $100 million towards gene research for an HIV cure.

Zero  Health Canada, for reducing the blood donation ban on men who have sex with men from one year to three months, instead of eliminating the ban completely.

Zero  Toronto serial killer Bruce McArthur who on January 29 pleaded guilty to eight counts of first-degree murder. On February 8, he was sentenced to life in prison.

Hero  Montreal LGBTQ activist Matt McLauchlin who kickstarted a campaign to lobby the City of Montreal, Ville-Marie borough and mayor Valerie Plante to name the public square next to Frontenac Métro station after 23-year-old LGBTQ activist Joe Rose. Joe was stabbed to death by four homophobic teenage thugs aboard the No. 358 bus outside Frontenac Métro station in the early-morning hours of March 19, 1989, just because he had pink hair. The brutal killing was a pivotal moment in the LGBTQ history of Montreal.

Heroes  The all-transgender “Team Trans” hockey team – comprised of players from Canada and the U.S. – played their first match at the Friendship Series in Cambridge, Massachusetts, on November 10.

Hero  India, for passing the Transgender Rights Bill in parliament on August 5.

Zero  Chick-fil-A for backpedaling after initially announcing on November 18 that it will no longer donate to anti-LGBTQ organizations. The fast food chain was widely condemned in 2019: it will cease operations at its first UK outlet after the Oracle shopping centre in Reading announced it will not extend the restaurant’s lease beyond six months, in April 2020; protestors crashed the grand opening of Toronto’s first Chick-fil-A on September 6; and Chick-fil-A lost several deals to open restaurants in U.S. airports.

Hero  Lawyer Mounir Baatour, the first gay man to run for president of Tunisia. On October 13, law professor Kais Saied won the election with 72.71 percent of the votes.

Hero  Los Angeles drag queen “Maebe A Girl” who made history in April when she was elected to the Silver Lake Neighborhood Council, becoming the first drag queen elected to public office in the U.S. She has also entered the race for the 28th Congressional District; that election will take place on March 3, 2020.

Hero  Lori Lightfoot who was sworn in as Chicago’s first lesbian mayor on May 20.

Hero  Gianmarco Negri who became Italy’s first transgender mayor when he was elected in Tromello on May 26.

Hero  U.S. presidential candidate Pete Buttigieg who said at the September 12 Democratic Presidential Debate that after serving as a military officer in Afghanistan, “I came back from the deployment and realized that you only get to live one life, and I was not interested in not knowing what it was like to be in love any longer. So, I just came out. I had no idea what kind of professional setback it would be.”

Hero  The Bank of England who put computer pioneer and WWII codebreaker Alan Turing on the new face of the new £50 note.

Hero   Canada, which on April 23 launched its new $1 coin marking 1969 as a “turning point” for LGBTQ civil rights in this country.

Hero  Canada, which as of June 4 now allows its citizens to identify as gender “X” on their passports.

Heroes   The 23 Google workers who protested their employer in the “Resistance Contingent” in the San Francisco Pride Parade on June 30, after parade organizers refused to ban Google from their parade for not removing homophobic videos from Google’s subsidiary, YouTube.

Hero   Team Montreal Pride for their strong albeit unsuccessful bid to host WorldPride in 2023.

Heroes   WorldPride NYC, for commemorating the 50th anniversary of the Stonewall Uprising in the largest Pride celebration in history. In addition to their massive parade on June 30, there was a grassroots Queer Liberation March retracing the steps of the original Christopher Street Liberation Day March of 1970 — the world’s first-ever Pride March — that ended with an afternoon rally in Central Park’s Great Lawn. There, queer hero and ACT UP founder Larry Kramer said in a speech about fighting HIV/AIDS, “In the end, we failed. I certainly feel that I failed. There is no cure for this plague. Too many of us are still getting infected. We have become too complacent with PrEP. Research for the cure is still in the Stone Age. The few treatments we have are woefully expensive and come with troublesome side effects. Their manufacturer is holding us up to ransom.” But Kramer would end his speech on a positive note: “If you love being gay as much as I do, fight back! Please give me something to be proud of again. Please — all of you — do your duty of opposition in these dark and dangerous days. Thank you for being here.”