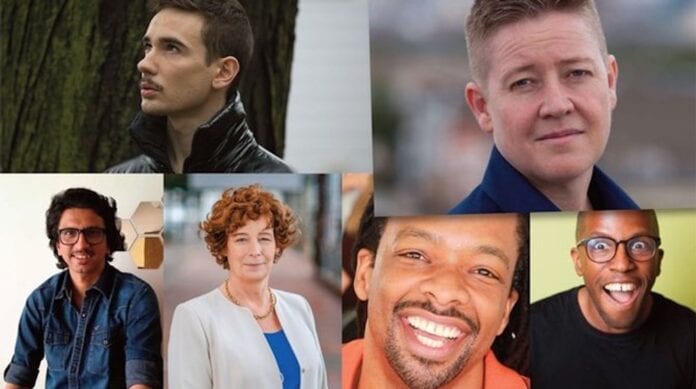 Here is Richard Burnett’s 25th annual column of the past year’s heroes and zeros.

ZERO Chinese authorities for shutting down Shanghai Pride on Aug. 20.

HERO Taiwan, one of safest places in the world during COVID-19, whose 18th annual Pride parade on Oct. 31 drew 130,000 spectators, the world’s largest in-person Pride event since the pandemic began.

HEROES The 25 community members who took part in the first 2-spirit walk in the Cree community of Mistissini, Quebec, on Sept. 23; The Cook Islands which held their first-ever Pride Day on March 27; and the incredibly brave thousands of marchers who demonstrated against Poland’s virulent state-sanctioned homophobia at Pride protests in Warsaw (Aug. 8) and Krakow (Aug. 19).

HERO Montreal-based Zambian-Canadian rapper Ashanti Mutinta, known professionally as Backxwash, the first transgender female artist to win the Polaris Music Prize, in October 2020, for the album God Has Nothing To Do With This Leave Him Out Of It.

HERO Canadian trans author Ivan Coyote who on June 9 was named the Alice Munro Chair in Creativity in the Faculty of Arts and Humanities at Western University.

HERO Black gay writers Jericho Brown and Michael R. Jackson who on May 4 received Pulitzer Prize awards for, respectively, Poetry and Drama. Brown won for his poetry collection The Tradition, while Jackson won for his acclaimed play A Strange Loop.

HEROES The Village People whose disco anthem YMCA was inducted into the U.S. National Recording Registry by the Library of Congress on March 25.

HEROES The record number of LGBTQ lawmakers – at least 117 – elected to U.S. Congress on Nov. 3. Other politicians elected include Delaware state senator Sarah McBride, the first out trans person ever elected to a state senate seat in the USA.

HERO U.S. Democratic presidential candidate Pete Buttigieg who changed what it means for LGBTQ candidates to run for office.

ZEROS The 28 per cent of American LGBTQs who voted for Donald Trump, according to exit polling by Edison Research.

HERO Merriam-Webster which updated its definition of “sexual preference” to say its use is “offensive” after the issue came up on Oct. 13 during the U.S. Supreme Court confirmation hearing of Judge Amy Coney Barrett.

ZERO An Algerian court for sentencing two men to three years in prison, and 42 others to suspended one-year sentences on Sept. 3 after police raided a “gay wedding” on July 24.

HERO Gabon whose senate voted on June 29 to decriminalize homosexuality.

HERO Norway which announced July 5 it will prioritize LGBTQ refugees, then on Nov. 10 outlawed hate speech against transgender and bisexual people, expanding its penal code which has protected gays and lesbians since 1981.

ZEROS Jakarta police for arresting 56 males at a private gay party on Aug. 29. The nine organizers were charged under an Indonesian criminal code provision used to charge pimps and face 15 years in prison.

ZERO Turkey for ordering schools in May to stop kids from drawing rainbows because it is a “ploy to turn children gay.”

ZERO The Canadian Museum for Human Rights in Winnipeg, whose tour guides were told to censor LGBTQ content on school tours of the museum.

HERO Costa Rica which on May 26 became the first Central American country to legalize same-sex marriage.

HEROES US National Institute of Allergy and Infectious Diseases researchers who reported at the 23rd International AIDS Conference that long-acting injections of cabotegravir administered every two months are more effective at preventing HIV than daily Truvada. Their large clinical trial tracked some 4,600 HIV-negative gay and bisexual men and transgender women in several countries.

HERO Montreal doctor Pierre-Paul Tellier who was named 2020 Family Physician of the Year by both the Quebec College of Family Physicians and the College of Family Physicians of Canada. Dr. Tellier was also 2020 recipient of the Faculty of Medicine’s Haile T. Debas Prize (which recognizes faculty members who promote diversity and create an environment of inclusivity) at McGill University, and received a $144,000 grant from the COVID-19 Pandemic Response & Impact Grant Program (Co-RIG) for the project “LGBTQ migrant health clinic and outreach program in Montreal.” Dr. Tellier and Dr. Edward Ou Jin Lee are the two medical co-leads on the project, while Dr. Vania Jimenez is the Principal Investigator.

ZERO Lachine native Andre Faivre who was sentenced by Quebec Court Judge Yvan Poulin on Feb. 5 to 12 years in prison for operating what prosecutors described as a “pedophile social club.”

ZERO Brian Boucher who was stripped of his priesthood by the Roman Catholic Archdiocese of Montréal on Oct. 23 after Boucher was sentenced in March 2019 to eight years in prison for abusing two boys.

HERO LGBTQ civil rights icon Bayard Rustin who on Feb. 5 was granted a posthumous pardon by California governor Gavin Newsom. Rustin, who taught Dr. Martin Luther King Jr. non-violent protest and was the primary organizer of the 1963 March on Washington, served 50 days in jail and was registered as a sex offender after he was arrested in January 1953 in Pasadena, California, for having consensual gay sex.

ZERO Adam Levin, owner of LGBTQ legacy publications The Advocate and Out, for donating money to anti-LGBTQ Republicans.

HEROES Lucas Silveira and Richie Shazam, hosts of the new makeover TV series Clothes Minded for transgender and gender non-conforming young adults, which will premiere globally on OUTtv and Fuse in 2021.

HERO Bisexual Canadian pop star Jann Arden whose hit CTV sitcom Jann has been picked up by Hulu in the U.S.

HERO The ITF for renaming the Fed Cup women’s tennis tournament the Billie Jean Cup. It is the first time a major global team competition has been named after a woman.

ZERO Greg Clarke who resigned as chairman of the English Football Association on Nov. 10, then as a VP of Fifa on Nov. 12, after a British parliamentary hearing in which he said being gay was a “life choice.”

HERO Two-time Olympic champion Caster Semenya whose legal battle against regulations requiring women with high testosterone to take medication to compete internationally between 400m and a mile, was dismissed by Switzerland’s Supreme Court on Sept. 8.

ZERO Tennis icon Martina Navratilova who was one of some 300 athletes who signed a letter from a group called Save Women’s Sports supporting Idaho’s law barring trans females from competing in women’s and girls’ interscholastic sports.

HEROES The LGBTQ establishments that were the bedrock of the community for generations. The advent of dating apps and the COVID-19 pandemic have forced many to close, including The Stud, the oldest gay bar in San Francisco; The Beaver in Toronto; and Menz and Mollyz in Halifax. NBC News estimated in May 2020 that there were just 16 lesbian bars left in America. In New York, that city’s oldest gay bar, Julius’ launched a GoFundme campaign to avoid closure, and the Gill Foundation donated $250,000 to save the Stonewall Inn.

Behind the lens with Sunil Gupta

Marching to their own beat: Crown Lands drummer Cody Bowles

The rage of Brad Fraser

Behind the lens with Sunil Gupta