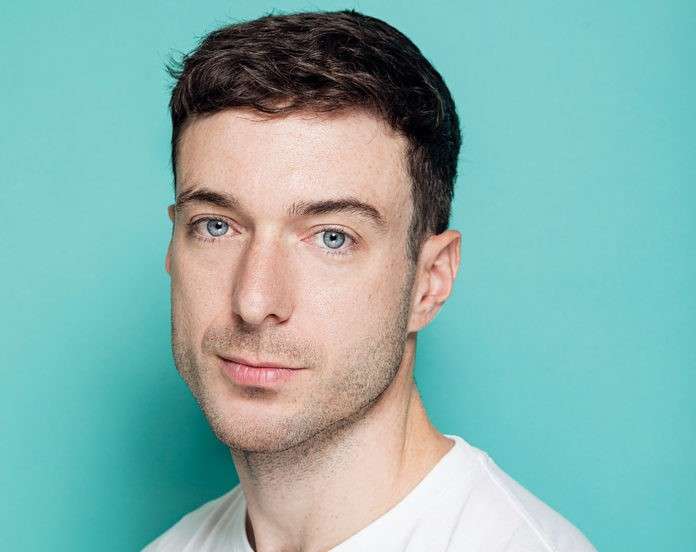 I last sat down with author and playwright Jordan Tannahill for toasté hotdogs, burgers and poutine at the Montreal Pool Room, on the eve of the October 2015 premiere of the play Total Liquidation across the street at the Monument National, written and directed by Jordan with the National Theatre School’s Acting class of 2016.

Jordan enjoyed his Montreal sojourn immensely. “For me, Montreal is a profoundly queer city,” he told me at the time. “It’s a romantic city, it’s a city dripping with sex.”

Born in Ottawa and currently based in London, the internationally-acclaimed playwright has twice won a Governor General’s Literary Award for Drama, his plays have been translated into 10 languages, and his work has been presented at venues including The Young Vic Theatre in London, Lincoln Center in New York and the National Arts Centre in his hometown.

Jordan’s new critically-hailed novel The Listeners (HarperCollins) is a compelling page-turner about a family torn apart by a mother’s obsession with a sound that no one else can hear.
I recently caught up with Jordan for a candid Q&A.

For The Guardian, you recently you wrote about “the Hum”, a low-frequency hum that has become a global phenomenon. How did the Hum inspire you to write The Listeners?
Jordan Tannahill : From the moment I first heard about the story I was intrigued by the ways the hum can kind of isolate people – you know, one person in the family could hear it, but no one else? The mystery and its impact really got under my skin. It sort of reminded me a little bit of the Todd Haynes’ film Safe starring Julianne Moore as a woman unraveling due to this kind of mysterious, inexplicable environmental illness.

Was it scary writing this novel?
Well, I guess writing a novel is always a bit scary, you never know how you’re going to finish it or if it will be any good. But to be honest, it was a real pleasure. It was four years in the making and I came to love Claire, the main protagonist. The book also allowed me to interrogate my own thoughts around questions of spirituality and conspiracy culture.

Is there a playwright’s approach to novel writing?
I tend to script out dialogue. This book is a monologue in a way, an internal monologue, although there are scenes where characters are speaking to one another as well. So it is similar to the way I might plot out a play.

How central is your queerness to your identity? Are you a queer artist, or an artist who happens to be queer?
I am definitely a proudly queer artist and writer. The Listeners is not explicitly a queer novel. Queerness doesn’t necessarily occupy an important place in the plot, or even theme, but my queerness suffuses the book in a sort of abstract way.

I love that you still have your Videofag email address. Your Videofag space influenced other alternative spaces in Toronto; it was even portrayed in Eric Kostiuk Williams’ 2018 graphic novel Our Wretched Town Hall.
Being part of that rich Queer Toronto legacy is the thing I am most proud of, and it is a source of inspiration to me. These artists are my elders and my peers, and they inspire me.

Our friend, writer R. M. Vaughan was a big fan of Videofag. We lost Richard last year. I thought he was a national treasure.
Absolutely, “national treasure” is the right term. Richard was a dear friend, a mentor and a great friend of Videofag. We always loved having Richard there. His passing left a huge hole in our scene and in our hearts. I think of him constantly I’m sure Richard had his own need to be liked. But I also always admired his seeming disregard for that as well. He spoke his truth and was unapologetic –– unapologetically himself. And that is something I aspire to be.

You aren’t a friend of the British monarchy. But on your Instagram account there is a photo of you accepting a Governor General’s award from former Governor General Julie Payette. What is it like to win a GG? Can we separate the awards from the institution?
My position is that Canada should cut ties with the crown, perhaps become a Republic. I think that sentiment has increased recently because the crown is a reminder of colonization and of its brutality. But ultimately the prize is administered by the Canada Council, so on those grounds I am able to accept the prize. I have certain problems with the way it is attached to the figurehead of the Governor General, but fundamentally I do see the value and role of having a national literature prize.

How has your life changed since you moved to London, England? Following you on Instagram, I feel in a way like you’re coming out all over again.
I came out when I was 14 but when I turned 30, I realized my sexuality is far more expansive than I even thought it was in my early 20s. Turning 30, I thought there’s actually so much more space for me to expand into, to discover and be curious about, like the playfulness, the perversity or the commerce of sex. And I’m not ashamed to say – in fact I am proud to say – that I’ve been doing sex work over the last couple of years. It is something that I do rely on financially, but I also feel sex work has allowed me to explore my own sexuality and my own relationship to fetish and roleplay, and I do see all that feeding back into my work.

You have found a new sexual freedom?
When I moved to London I explored their broader fetish scene and the London queer rave scene, and those things really helped unlock the power of metaphor, costume and even character within sex and roleplay.

In January you marked your anniversary as a rape survivor. How have you dealt with the trauma and how are you moving on?
I appreciate the question. I was raped in January 2019. When it happened, it was a very harsh, incredibly disorienting and disempowering experience. I was dealing with residual trauma for months afterwards. It affected my life, my capacity to make relationships work, my sense of self. Through supportive friends, through therapy, and through the love of my family and community, I feel I am now in control of that narrative. I have also been kind of erasing the space between my public and private self on Instagram by posting fetish pictures and having a sex-positive persona.

Sounds like you’re in a better place today.
Yeah, thank you so much. I definitely feel that way. And I feel much savvier. How to kind of engage with a whole sort of variety of experiences.

You loved your time in Montreal, sounds like you are also enjoying what London has to offer.

Montreal has a very special place in my heart. I loved working with National Theatre School. And I also feel like I have flourished in London. I do still feel that in my core I am a Torontonian, forged by the art that I saw and made there and experienced there, and the queer community and friends I made and keep there. I will return one day.


INFOS | The Listeners by Jordan Tannahill, published by HarperCollins

The confessions of Rob Halford